SP spokesperson Rajendra Chaudhary denied the charge that the main accused in the clash over a land dispute that claimed the lives of 10 Gond tribals had any connection with his party. 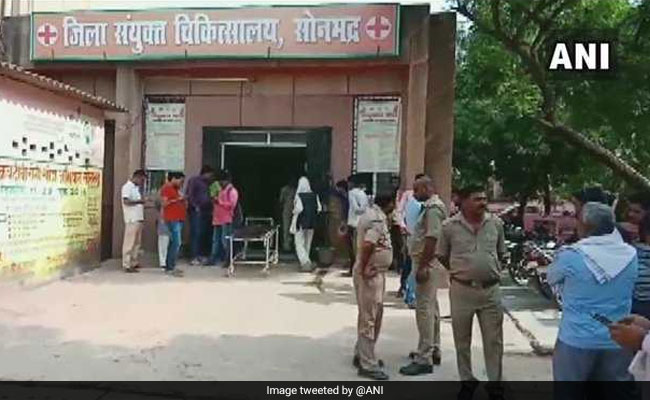 Ten persons were killed and 28 injured in the clash in Sonbhadra on Wednesday. (File photo)

Hitting out at Uttar Pradesh Chief Minister Yogi Adityanath for claiming that the main accused in the Sonbhadra clash was a Samajwadi Party member, the opposition party on Sunday said the chief minister was levelling allegations against it only to hide his failures.

Talking to news agency Press Trust of India, SP spokesperson Rajendra Chaudhary denied the charge that the main accused in the clash over a land dispute that claimed the lives of 10 Gond tribals on Wednesday had any connection with his party.

"Yogi Adityanath is trying to hide his failures by indulging in such useless talks. How can the BJP shrug off the responsibility as regards the crime committed in Sonbhadra? Law and order and the safety and security of people are the responsibilities of the state government," he said.

Claiming that the ruling Bharatiya Janata Party (BJP) did not want the world to know about the anarchy prevailing in Uttar Pradesh, Mr Chaudhary said, "It (BJP) is unable to run the government in the state. The piece of land over which the clash took place was in dispute for years. The affected people had approached the officials during the tehsil diwas and thana diwas, but their grievances went unheard."

Reacting to the chief minister's statement that the main accused in the incident was an active member of the SP, he said, "Yogi Adityanath is making incorrect statements. Yagyadutt does not have any connection with the SP."

Later, in a statement issued by the party, Mr Chaudhary said that SP leaders and party workers will participate in a campaign-- "Sonbhadra kooch karo abhiyaan" to register their protests over the death of 10 persons in the clash, which took place in the district.

Earlier, addressing a press conference in Sonbhadra, the chief minister said, "The accused person in this incident is a worker of the Samajwadi Party. He has an active role in the Samajwadi Party. Apart from this, his brother is a BSP leader. All of them have been misusing power. Cases were filed against poor people by misusing power and actions were taken in favour of the then ruling party."

Ten persons were killed and 28 injured in the clash in Sonbhadra on Wednesday after a village headman and his supporters opened fire on a group of tribals over a land dispute.