"Congress, BJP Both The Same": Akhilesh Yadav After Releasing Manifesto 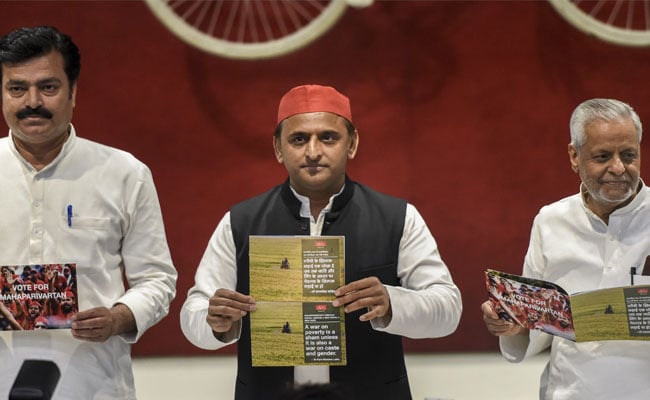 In a marked departure from his stance earlier, Samajwadi Party chief Akhilesh Yadav today launched a direct attack on the Congress, while releasing the party's vision document in Lucknow, a week ahead of the Lok Sabha elections. At a press conference after releasing the party manifesto, he toed the same line as his alliance partner and BSP chief Mayawati and alleged that both the Congress and the BJP are equally guilty of bringing anti-poor policies.

Two weeks ago, when the Congress had announced that it would not put up candidates on seats being contested by the mahagathbandhanstalwarts as a reciprocal gesture for the SP-BSP not naming candidates in the Gandhi family bastions of Amethi and Raebareli,  Akhilesh Yadav had tweeted that he or Mayawati did not want the Congress' help and that the party was free to put up candidates anywhere it wanted.

Mayawati today took on both the Congress and the BJP and tweeted: "India suffered immensely under the Emergency imposed by the Congress government of Indira Gandhi but the undeclared political and economic emergency of notebandi has made the lives of 130 crore people miserable causing huge unemployment. They now eagerly await to get rid of this BJP government." (sic)

It is widely believed that Mayawati was totally opposed to the idea of forming any alliance with the Congress in UP for the Lok Sabha polls. The BSP chief is learnt to have persuaded Akhilesh Yadav to go along with her view. The latter had tied up with the Congress before the 2017 assembly elections in the state and both parties lost miserably to the BJP in the elections.

Mayawati and Akhilesh Yadav will launch their mahagathbandhan campaign on Sunday, when they are set to share the stage at a massive rally in Saharanpur.