'The cops were around to help,' said a source 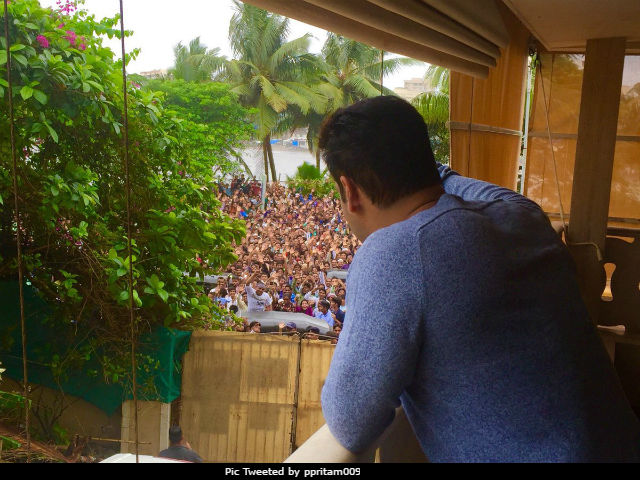 Salman Khan on the balcony of Galaxy Apartments (courtesy ppritam009)

New Delhi: Not all of Salman Khan's fans who had gathered outside Galaxy Apartments - his Mumbai residence - on Eid, were satisfied with the actor waving to them from the balcony. A mid-day report states that a certain section of the crowd turned unruly and attempted to scale the wall of Galaxy Apartments when they were stopped by Salman's bouncers who were outside the building. However, there were cops stationed for security, who reportedly lathi charged to bring the fans in check, stated mid-day. On Monday, Salman appeared on the balcony to greet his fans for the first time around 5 pm in the evening and in another three hours the crowd had expectedly swelled by a large number. The source who spoke to mid-day, reportedly witnessed the incident around 8:15 pm.

"There was a lot of traffic because of the crowd outside his house. But, that's how it is every year. However, this year, a bunch of unruly men tried to climb the walls and get into his Galaxy home. The bouncers stopped them in time. The cops were around to help. In the end, because of a few people, they had to resort to lathi-charge," mid-day quoted the source as saying. The roadblock, which happened because of fans thronging the streets for a glimpse of the actor, cleared in 45 minutes, stated the report.