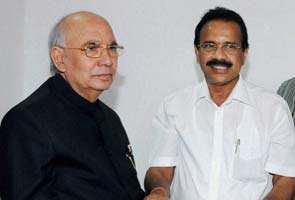 Bangalore: DV Sadananda Gowda, the Bharatiya Janata Party's (BJP) second chief minister in four years in Karnataka, has formally resigned. He said he wishes his successor, Jagadish Shettar, good luck and prays "God will give him strength." Mr Gowda added that "when we go for elections, we should go with the blessings of the people of Karnataka."

However, dramatic scenes were witnessed at Mr Gowda's residence "Anugraha" with his supporters, raising slogans, made a forceful bid to prevent him from submitting his resignation. Some of them even squatted on the road to block his car. Police forcefully evicted them. His supporters had also gathered outside Raj Bhawan, but the police intervened to clear the way for him. Mr Gowda sought to pacify his supporters and left to meet the Governor.

It's the prospect of Assembly elections - less than a year away - that have forced Mr Gowda to step down. He was chosen as chief minister last year by BS Yeddyurappa, the most powerful man in the BJP in the state. It was also Mr Yeddyurappa who insisted that unless Mr Gowda were removed, he would force a split in the party.

It comes down to caste. Mr Yeddyurappa is a leader of the Lingayat community, a powerful and rich vote bank. So is Mr Shettar. At one point, that made him a rival for Mr Yeddyurappa. Now, they are the new power couple.

Mr Yeddyurappa was forced to quit after a report on illegal mining indicted him for corruption.  He hand-picked the non-controversial Mr Gowda, who is from the Vokkaliga community, as his successor. But because Mr Gowda seemed keen to exert his own influence and develop a camp of supporters, Mr Yeddyurappa decided it was time for a change. When his party refused to reinstate him as head of the government, he opted for Mr Shettar.

The party may placate Mr Gowda by making him the state president of the BJP. There is also speculation about whether the post of Deputy Chief Minister will be created and assigned to either to R Ashok, a Vokkaliga like Mr Gowda, or state BJP president KS Eshwarappa, who is a Kuruba.

Promoted
Listen to the latest songs, only on JioSaavn.com
The BJP is trying hard to balance caste and community aspirations as it prepares for Assembly elections less than 10 months away. In Mr Shettar it is giving the state a chief minister from the powerful Lingayat community. But it cannot afford to alienate Mr Gowda's influential community, the Vokkaligas, either. The Vokkaligas are upset that he has had to make way for Mr Shettar. There have been protests in the state since he resigned.