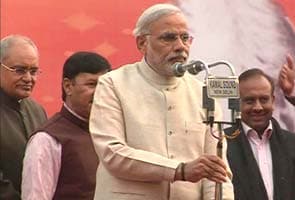 New Delhi: The Congress today said that the entry fee of Rs 5 for a Narendra Modi rally in Hyderabad next month reflects his market value.

Union Minister Manish Tewari tweeted that tickets for even flop films sell for Rs 200-250. Later, he said, "It's now become very evident that the BJP has decided to impose a listening tax... When will they impose a speaking tax?"

The BJP retaliated that it has delivered a paradigm shift. "People paying to hear a leader! And the proceeds to be given away for a cause-Uttarakhand? Unheard of in our political culture?" tweeted spokesperson Nirmala Sitharaman.

The party hopes a gold rush for tickets for the August 11 event will demonstrate the popularity of its front-runner for prime minister, even in a Southern state. (Read: BJP's Book-My-Show for Narendra Modi)

The Lal Bahadur Stadium in Hyderabad, which can accommodate 30,000 people, has been booked for the speech, but the BJP expects a lakh to attend.

Promoted
Listen to the latest songs, only on JioSaavn.com
In public comments in recent days, Mr Modi appears to be re-embracing the sort of hardliner image that he spent years trying to bury. His critics say that he did not do enough to check the deadly communal riots in Gujarat in 2002, when he had just taken over as chief minister. Mr Modi has, in recent years, offered his economic development of his home state as his main strength.

But since Friday, he has used the analogy of a puppy being run over in the context of the riots, said he is a Hindu nationalist, and accused the Congress of using a "burqa (veil) of secularism" to conceal its administrative failures. The comments seem strategically designed to polarise the pro-Hindutva vote in the face of his rivals attempting to consolidate the minority vote against him with a communal vs secular debate. (Read: Behind Modi's choice of words, some see a careful motive)