The probe Agency ED said the vessel is linked to Pankaj Mishra--- a political aide of Jharkhand Chief Minister Hemant Soren, who was arrested by the ED recently in an illegal mining case and is in the agency's custody till August 1. 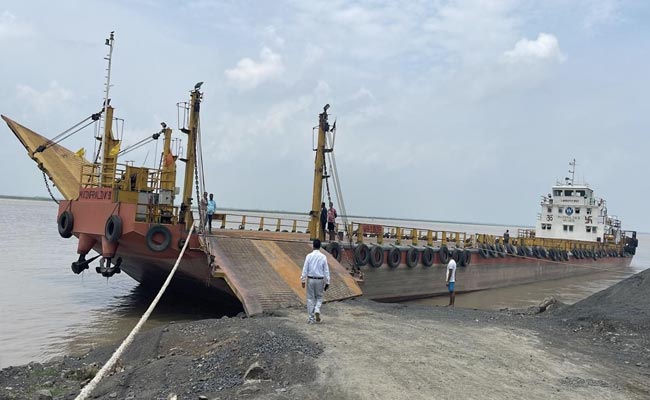 The ED also filed an FIR on Tuesday at the local police station against the owner of the vessel.

The Enforcement Directorate on Wednesday said it has seized a Rs 30-crore vessel, operated at the behest of a man linked to an arrested aide of Jharkhand Chief Minister Hemant Soren, allegedly used to transport illegally mined stone chips and stone-boulders from Jharkhand.

They said the vessel is linked to Pankaj Mishra, a political aide of Jharkhand Chief Minister Hemant Soren, who was arrested by the ED recently in an illegal mining case and is in the agency's custody till August 1.

The inland vessel, named Infralink-III with registration no WB 1809.

The ED also filed an FIR on Tuesday at the local police station against the owner of the vessel.

The federal agency said in a statement Wednesday that the vessel was being "operated illegally without having any permit from Sukargarh Ghat in Sahebganj (Jharkhand).".

"The vessel was being operated at the behest of Rajesh Yadav alias Dahu Yadav in collusion with Pankaj Mishra and others for transporting illegally mined stone chips/stone boulders," the ED said.

The estimated cost of the vessel is around Rs 30 crore, it said.

The agency said it had earlier seized  two "illegally" operated stone crushers of Maa Amba Stone Works operated by Bishnu Yadav and Pavitra Yadav along with three trucks that were found at Mauza Majhikola in Sahebganj carrying illegally quarried stone chips/boulders without having any mining challans.

The agency said it has also identified an illegal mine situated at Mauza Simaria, Sahebganj, operated by Bishnu Yadav and others while another has been marked at Mauza Demba, Sahebganj where mining "exceeded far beyond the leased area".

"The quantification of the excess illegal mining done at the above site has been estimated around 37.5 million cubic feet which has remained undeclared and concealed.The processed value of the mined stone chips/boulders is estimated to be around Rs 45 crore," the statement said.

An ED team is camping in the Sahebganj district since July 25 and is undertaking a joint survey of the mines areas along with the Jharkhand state pollution control board, district mining office, district forest office and other departments "to identify the beneficiaries of such illegal mining activities and to investigate the proceeds acquired through illegal mining activities".

The ED probe against Mishra and his alleged associates was launched on July 8 after the federal probe agency raided at least 19 locations in Sahibganj, Barhet, Rajmahal, Mirza Chauki and Barharwa in Jharkhand in a case linked to alleged irregularities in the operation of toll plaza tenders and instances of illegal mining in the state.

The searches were launched after the ED filed a PMLA case in March against Mishra and others alleging he "illegally grabbed/amassed huge assets in his favour." After the raids, the ED had frozen deposits of Rs 11.88 crore lying in 37 bank accounts belonging to Mishra and Rajesh Yadav.

Apart from this, "unaccounted" cash amounting to Rs 5.34 crore was also seized by the agency, which claimed that the money was linked to "illegal mining" in Jharkhand.

Five stone-crushers that were being "illegally" operated and an equal number of "illegal firearm cartridges" were also seized by the ED.

"The evidence collected during the course of the investigation, including the statements of various persons, digital evidence and documents, revealed that the seized cash/bank balance is derived from illegal mining being rampantly done in the Sahibganj area, including the forest area," the ED had said.

The agency said it was probing a trail of Rs 100 crore of "proceeds of crime" generated from illegal mining operations in the state.

It had recently stated that cash amounting to more than Rs 36 crore, linked to "illegal mining" in Jharkhand, was seized by its teams over the last more than two months as part of two separate money-laundering investigations.

The second instance where cash linked to alleged illegal mining in the state was unearthed pertains to the ED action against suspended Indian Administrative Service (IAS) officer Pooja Singhal in May.