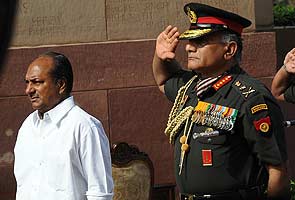 New Delhi: Was the bribe offered to the Army Chief recorded on tape? Sources say details have now emerged which suggest the army chief may have proof of the bribe offer on tape.  Sources have also told NDTV that this tape has been sent to the Central Bureau of Investigation (CBI) that is now looking into the matter.

The defence minister also said that the Army chief, General VK Singh, had told him that the lobbyist who offered him the kickback was Tejinder Singh, who had retired as Lieutenant-General and was not in service when he allegedly offered the chief the money.

In an interview to NDTV yesterday, the retired officer said he has never offered a bribe to the Army chief. Speaking to NDTV, General Tejinder Singh said today that he had no animosity towards the Army chief but his lawyers have filed a defamation suit against General Singh. He further said that he had met the Army chief only in regard to a personal matter and that allegations against him were fabricated. (Met Army Chief for re-employment: Gen Tejinder Singh to NDTV)

A CBI inquiry was ordered yesterday by the Defence Minister after General Singh went public with media interviews about the bribe that was offered to him.  The CBI investigation will swing into operation after General Singh provides a written account of what happened. Explaining why he did not commission an inquiry earlier, Mr Antony told Parliament that he had not received a written complaint from the chief.

Mr Antony's remarks push the ball back into the chief's court and provide the latest expression to the strained relationship between the Defence Ministry and the Army chief. Yesterday, General Singh said that after he was visited in his office by a retired officer and offered a kickback to clear the purchase of 600 "sub-standard trucks," he had alerted the minister. Both the Congress and the BJP have said he should have filed a police case against the lobbyist for attempting to bribe a government servant.

"I will go to any extent to investigate the Army chief's allegations... all my life, I have fought against corruption" said Mr Antony, saying that he follows up even on anonymous letters that allege graft. He said he is ready to cancel any contract tainted by corruption.  The BJP's Arun Jaitley responded in Parliament by saying that his party is willing to work with the government to "cleanse corruption" but he also said that it is the government's job to distinguish between frivolous and substantive charges. "There is eventually civilian control of armed forces...issues that should be settled in closed doors are becoming a public debate which in case of armed forces should be avoided," said Mr Jaitley. He added that the government and the Army chief "should not have put blinkers on their eyes. This is learning to live with corruption," he said.

Mr Antony's comments today expose the latest instalment of the trust deficit between the Army chief and the Defence Ministry. Their relationship was heavily frayed by a year-long battle over General Singh's age, which culminated with the chief taking the government to court in January to accept his claim that he was born in 1951 and not 1950, which is his year of birth according to the government. The issue could have affected when he would have to retire. The General withdrew his petition after Supreme Court judges suggested they would not be able to rule in his favour. General Singh will step down at the end of May.

Promoted
Listen to the latest songs, only on JioSaavn.com
General Singh said in an interview on Monday that Rs. 14 crore was offered to him to clear the purchase of 600 "sub-standard" Tatra trucks. At the time, he said, 7000 trucks were already in use by the Army. But the Defence Ministry says that the Army has never complained about the performance of Tatra's heavy vehicles.