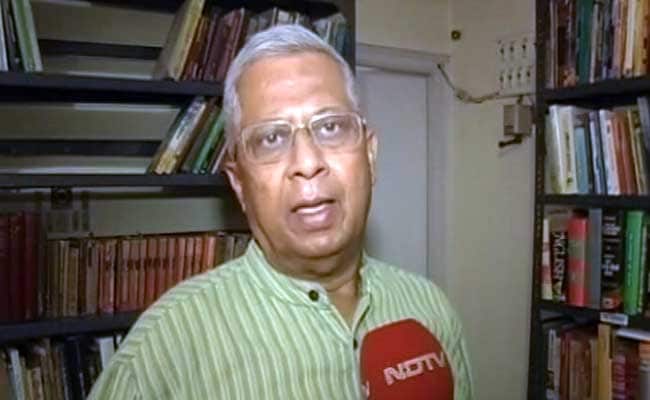 Veteran BJP leader Tathagata Roy, known for his controversial comments, triggered fresh row Tuesday for his tweet that some actor-turned-BJP candidates who never had anything to do with politics were fielded by the party only to concede electoral defeat in the West Bengal assembly poll.

He called three new political entrants from the tinsel world in BJP who were defeated by big margins as "politically stupid".

Mr Roy tweeted that a BJP ticket to contest an election involves lots of expense to run the poll campaign.

"Film and TV actors who never had anything to do with politics, let alone BJP, were handed tickets by BJPs election management team. Parno Mitra (Baranagar), Srabanti Chatterjee (Behala West), Payel Sarkar (Behala East). These women were so politically stupid that they had gone on a steamer trip with TMCs playboy-politician Madan Mitra less than a month before elections and shot selfies with him. All were roundly defeated," he wrote.

Film and TV actors who never had anything to do with politics,let alone BJP,were handed tickets by BJP's election management team. Parno Mitra (Baranagar),Srabanti Chatterjee (Behala West),Payel Sarkar (Behala East). These women were so politically stupid that they had gone on

Mr Roy, however, soon tweeted a correction on the thread saying he meant Tanusree Chakraborty and not Parno Mitra as having shot selfies with Madan Mitra and "regretted the error".

Ms Tanusree had contested from Shyampur in Howrah district on a BJP ticket and had been defeated.

Tagging the BJP top brass in the tweet, he asked "What great qualities were these women possessed of? Kailash Vijayvargiya, Dilip Ghosh & Co must answer."

"It must not be forgotten that a BJP electoral ticket carries with it substantial money for running the election. Or for other purposes!"

Kanchan Mallick, a screen actor who fought on a Trinamool ticket and won the Uttarpara seat, reacted strongly to Mr Roy's jibe at his industry colleagues. "It is insulting for them even though they belong to my rival party," he said.

"He (Roy) cannot use such words just because they lost the battle and belonged to industry," Ms Mallick told reporters.

Interestingly Mr Roy did not comment on actor Hiron Chatterjee, who switched over from Trinamool and was nominated by BJP from Kharagpur, contested for the first time and won.

A BJP leader said Mr Roy's comment was his own and the party does not endorse such views.

Recently Mr Roy had entered into a verbal duel in the social media with actor-turned-Trinamool Congress leader Saayoni Ghosh over her views on certain matters and had filed a police complaint against her for a tweet posted years ago on the ground that it hurt the religious sentiments of Hindus.

Ms Saayoni was fielded by Trinamool Congress from Asansol South and lost to Agnimitra Paul of BJP.