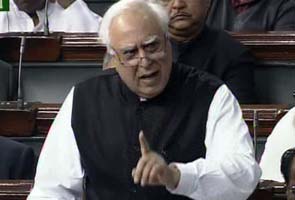 New Delhi: After a cartoon depicting Dr BR Ambedkar being used in a Class XI textbook caused an uproar in Parliament leading to adjournment of both Houses, and an apology from the government, two senior National Council of Educational Research and Training (NCERT) officials had to resign today over the issue.

1. There were loud protests in Parliament today over a cartoon depicting Dr BR Ambedkar in an NCERT textbook, which resulted in both Houses being adjourned. The cartoon depicts Dr Ambedkar, the author of the Indian Constitution, sitting on a snail and the country's first Prime Minister Jawaharlal Nehru standing behind him, brandishing a whip. The text alongside criticises Dr Ambedkar and suggests he went slow on framing the Constitution.

2. A work of renowned cartoonist Shankar in the 1960s, the cartoon has been part of the NCERT book since 2006. Today, MPs waved copies of the cartoon in Parliament and said it insulted both leaders.

3. HRD Minister Kapil Sibal issued an apology in the Lower House and said that he had already directed the NCERT to remove the cartoon on April 26 this year. "The text book will not be further distributed. We have great respect for BR Ambedkar. There is no question of maligning him. I was not a minister at that time. As soon as I got to know I have taken action. I however apologise if it has caused hurt and this is not a political issue," he said. The cartoon was removed three days ago. The HRD ministry has ordered an inquiry into how it made it to a text book.

4. Mr Sibal also said outside Parliament that when it the came to his notice last month that the textbook had this cartoon, he asked to see it, ordered its removal and also asked for the removal of several other objectionable cartoons. He said that a panel would also be set up to review all NCERT textbooks and that distribution of this book had been stopped.

5. Following the uproar, Yogendra Yadav and Suhas Palshikar, chief advisors for political science at the NCERT resigned this evening. Speaking to NDTV, Mr Yadav said, "In this case, a law must be passed to ban cartoons."

6. Earlier in the day, as MPs across parties protested angrily Leader of the Lok Sabha Pranab Mukherjee agreed with them and said, "I entirely agree with the sentiments expressed by all sections of the House. It is not confined to one section. I don't know who has worked out this cartoon and with this impression it is totally wrong. Without Dr Ambedkar's tireless efforts, it would not have been possible to bring the Indian Constitution, described by Sir Anthony Eden as the biggest magna carta of socio-economic transformation, within three years."

7. Not buying the government's explanations, BSP leader Mayawati said in the Rajya Sabha that removing the cartoons was not enough action and the government must explain its stand. She also demanded that the minister concerned make a statement in the Upper House as well."

8. Speaking in the Rajya Sabha later, Mr Sibal reiterated that the cartoon was objectionable. "Concrete steps will be taken to ensure such things are not repeated," he assured the House.

Promoted
Listen to the latest songs, only on JioSaavn.com
9. CPI Leader, D Raja told reporters outside Parliament that the cartoon was derogatory to both Mr Nehru and Mr Ambedkar. "If it was a private publication, there would not have been an issue," he said.

10. It was Thirumaa Valavan Thol of the Viduthalai Chiruthaigal Katchi (VCK), a UPA constituent, who brought up the issue as Lok Sabha reconvened this morning. He trooped into the Well waving a placard on the cartoon. He then distributed copies of the cartoon, upstaging the BJP's protest against Home Minister P Chidambaram over the Aircel-Maxis deal.