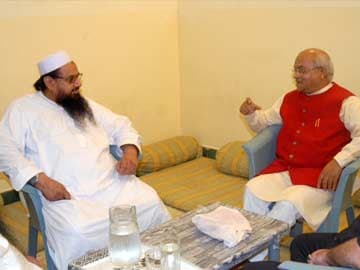 New Delhi: The Congress today attacked the BJP-led government in the Rajya Sabha over a recent meeting in Pakistan between 26/11 mastermind Hafiz Saeed and a journalist considered close to yoga teacher Ramdev. (Lashkar Founder Hafiz Saeed Spews Venom Against India and America)

Congress MPs sought to know why freelance journalist Ved Pratap Vaidik had met the man who tops India's list of most wanted on July 2.

Former union minister Anand Sharma alleged, "Such meetings cannot take place without the knowledge of officials. Therefore a legitimate question arises, was the government of India in the loop?"

The government has nothing to do "directly, indirectly or even remotely" with any journalist meeting Saeed, Finance Minister Arun Jaitley said in the House, adding that the "government has not sanctioned permission to anyone for meeting him (Hafiz Saeed)." Protests forced the Rajya Sabha to adjourn twice. (Also Read: Hafiz Saeed's speech threatens terror strikes)

As a photograph of the journalist's meeting with Saeed circulated on social media, senior Congress leader Digvijaya Singh had tweeted this morning, "Did he go as an Envoy of NDA Govt or as a personal Envoy of PM?"

Another Congressman, Saifuddin Soz, alleged that Mr Vaidik was "very close to the RSS, closely associated with Ramdev." The yoga teacher had campaigned for the BJP during the general elections. (Who Said What)

Mr Vaidik, 69, who met Saeed while touring Pakistan along with a group of journalists and politicians invited by a peace research institute, said, "I have never been a special envoy for any PM, I am my own envoy."

He said he met Saeed as "a journalist must meet all kinds of people" and added, "For a journalist, no one is untouchable. I wanted to prove him wrong and influence his thinking."

Promoted
Listen to the latest songs, only on JioSaavn.com
India accuses Saeed, founder of the Pakistan-based terror outfit Lashkar-e-Taiba, of plotting a series of terror strikes in India, including the 26/11 Mumbai attacks in 2008, in which 166 people were killed.

Though Saeed is on India's most wanted list and has a US bounty of $10 million on him, he roams free in Pakistan and often addresses public rallies in which he routinely makes inflammatory statements. (Also Read: US Names Jamaat-ud-Dawa as Terror Outfit)