Enforcement Directorate's advocate said the probe was incomplete and NRI businessman's further custody was required to confront him with various documents and persons. 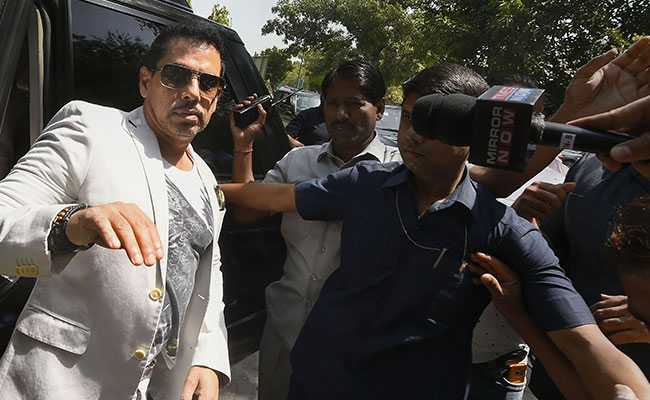 Robert Vadra is alleged to have acquired a London-based asset

A Delhi court Tuesday extended by three days the custodial interrogation of NRI businessman CC Thampi, arrested by the Enforcement Directorate (ED) in connection with its money laundering probe against Robert Vadra in a case related to acquisition of alleged illegal assets abroad.

ED's advocate Amit Mahajan said the probe was incomplete and CC Thampi's further custody was required to confront him with various documents and persons.

The probe agency however did not disclose the names of the people who will be called to join the investigation.

The accused was produced before the court on expiry of his 3-day ED custody granted earlier.

The case relates to allegations of money laundering in the purchase of a London-based property- located at 12, Bryanston Square- worth 1.9 million pounds, which is allegedly owned by Robert Vadra.

Seeking his further custody, the agency told the court that his interrogation was required to unearth the larger conspiracy.

"We (ED) were not able to complete the probe in last three days. There are a lot of documents which are very essential. In the coming days we want to summon more people which we don't want to disclose," the agency, also represented by advocates NK Matta and Atul Tripathi, told the court.

The ED also told the court that the pre-arrest bail of the co-accsued- Robert Vadra and his close aide Manoj Arora- has been challenged.

Another co accused, Sanjay Bhandari, is absconding and Red Corner Notice has been issued against him, the agency further submitted.

Opposing the ED's application for further custody, senior advocate Raju Ramachandran said the accused has already made 16 appearances and spent more than 80 hours before the agency.

"30,000-page documents have been seized," he told the court.
Thampi was willing to appear before the agency, and he has medical ailments, Mr Ramachandran said.

CC Thampi was arrested by the ED last week. He is stated to be "controlling" a Dubai-based company Sky Lite. In 2009, Mr Bhandari's firm Santech FZE purchased a London asset from a private company which was acquired by Sky Lite.

Robert Vadra is alleged to have acquired this London-based asset, and few purported emails between him and Mr Bhandari, regarding renovation of the London flat, are part of the evidence in the case.

The agency claimed that CC Thampi met Robert Vadra through an aide of his mother-in-law, while the latter reportedly told the ED that he only met him on board an Emirates flight some years ago.

The accused during his earlier grilling session with the ED, claimed that Robert Vadra had stayed at the Bryanston Square property in London. In his statement made to the agency Robert Vadra denied the claim.

The agency said that the accused's arrest and subsequent custodial grilling will unravel the "missing links" in the case where the ED has charged Robert Vadra with acquiring illegal assets abroad in coordination with Mr Bhandari.

CC Thampi has been charged by the agency in the past in alleged illegal hawala dealings and land purchase case in the country in 2017 in alleged contravention of the Foreign Exchange Management Act  (FEMA).

It had also issued a FEMA show cause notice to the accused for alleged violation of foreign exchange laws to the tune of over Rs 1,000 crore in the purchase of vast tracts of land in Kerala.

The ED said CC Thampi is also under the scanner for his reported dealings with some politicians and bureaucrats.

The agency earlier told a court that it had received information about various new properties in London which belong to Robert Vadra.

These include two houses- one worth 5 million pond and the other valued at 4 million pound, six other flats and more properties.

Robert Vadra has consistently denied these charges and has said he will cooperate in the probe. He said he was being "hounded and harassed" to subserve political ends.