Normal life in parts of north Bengal was affected as torrential showers in Darjeeling, Kalimpong and Jalpaiguri triggered landslides causing damages to roads and bridges. 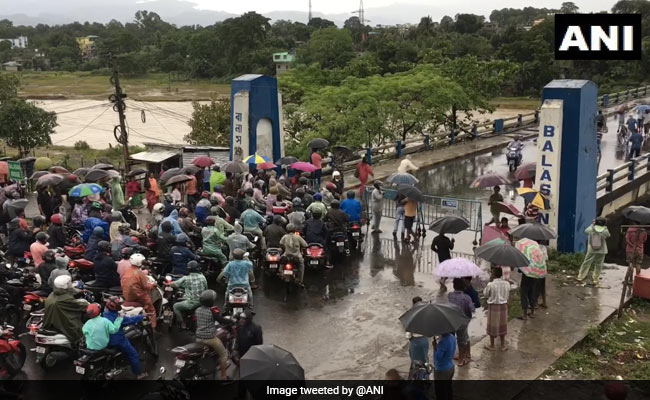 Movement of traffic on Balason Bridge in Bengal's Darjeeling was suspended due to torrential rains.

Torrential rains pounded the tiny Himalayan state of Sikkim and the tea growing region of North Bengal today, causing landslides which cut off National Highway-10, the main road linking Sikkim's Gangtok with the rest of the country.

The incessant downpour today saw landslides blocking the crucial National Highway-10, used both by civilian and military traffic, at the 29th Mile area in West Bengal, around 60 km from Sikkim's Rangpo border. Supporting pillars of a steel bridge at Rangpo, the gateway to Sikkim, were also damaged as the powerful Teesta river which has been in spate over the past few days, swept embankments at many points.

Hundreds of tourists, who have thronged the hills during the Durga Puja season, are facing difficulties in travelling to their next destination or reaching railway stations or the Bagdogra airport to return home, owing to the incessant rain and landslides, officials said.

As the downpour continued, 3,800 cubic feet of water flow per second was released from Bengal's Gajaoldoba Teesta Barrage, causing inundation in several parts of the low lying town of Jalpaiguri.

The India Meteorological Department issued a red alert for Darjeeling, Kalimpong and Alipurduar, forecasting "extremely heavy rain at one or two places" in these districts till Thursday morning.

Jalpaiguri and Cooch Behar are likely to receive heavy to very heavy rain during the period, it said.

A bridge on the Balason river at Matigara on the outskirts of Siliguri in Darjeeling district also got damaged.

Siliguri Police Commissioner Gaurav Sharma said vehicles have been diverted to another route owing to the damage to the bridge, while motorcyclists and pedestrians have been allowed to use it.

"We are urging people to make plans for long travel to reach their destinations owing to the diversion," he told reporters.

Several low-lying areas in Jalpaiguri district have been flooded owing to a rise in the water level of Teesta and Jaldhaka rivers. People from these areas were being moved to safe places for shelter.

Water levels in Torsa and some other rivers in the region have also started rising owing to the torrential rain.

The India Meteorological Department said the inclement weather condition will prevail in the sub-Himalayan districts till Thursday morning.

Weather in West Bengal's southern districts, which received heavy rain since October 17 owing to a low-pressure system, improved considerably on Wednesday, though the weather department said thunderstorms with lightning at one or two places are likely during the day.

Dry weather will prevail in the southern parts of the state from Thursday, it added.

Recommendations On Covaxin Emergency Use For 2-18 Age Group Being Examined: Centre