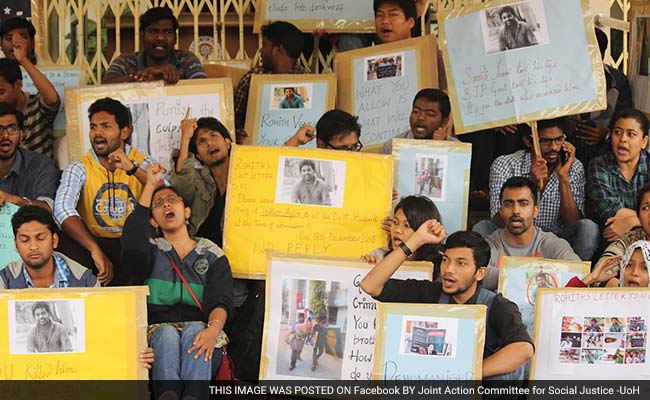 Hyderabad: Six letters are in the spotlight after the suicide of 26-year-old research student Rohith Vemula at Hyderabad's Central University, which is at the centre of an escalating political row.

Five of these letters were from Smriti Irani's Human Resource Development Ministry to the university and are being held up as proof of intense political pressure and interference.

The letters, sent between September and November, asked the university to respond to a written complaint by Bandaru Dattatreya against the alleged attack on an activist of the Akhil Bhartiya Vidyarthi Parishad or ABVP in August.

Rohith and four other students, accused in the attack, were suspended and banned from the hostel and cafeteria on December 21. Two weeks later on Sunday, Rohith was found hanging in a hostel room.
.
"Everyone knows that under central law, administrative control is with the university and not with the government," said Smriti Irani, denying central interference in the university.

But today, her ministry said it is bound by rules to acknowledge and forward letters by lawmakers.

Rohith's friends allege that the university's decision to punish the students was directly linked to the letter that Bandaru Dattatreya, the BJP parliamentarian from Secunderabad, wrote to Education Minister Smriti Irani.

The university had earlier cleared the students.

Mr Dattatreya's letter called the university a "den of casteist, extremist and anti-national politics" and complained that it had been a "mute spectator" to the attack on the ABVP activist.

Smriti Irani's ministry then emailed the university attaching Mr Dattatreya's complaint and asking what action had been taken.

"Comments on VIP reference of Bandaru Dattatreya, MoS for Labour and Employment," was the subject of the email dated 3 September.

Four more letters followed on September 24, on October 6 and 20, and on November 19 - sent by a Deputy Secretary, Joint Secretary and Under Secretary of the education ministry.

The letters, almost identical in content, cited Mr Dattatreya's complaint and said "comments/facts had not been received so far", indicating that the university had for long not responded to calls for action against the students.