Request You To Support Your Sister: Droupadi Murmu To YSR Congress In Andhra Pradesh

Vedic priests from the Kanaka Durga temple in Vijayawada bestowed 'veda aasirvachanam' on Dropuadi Murmu on the occasion. 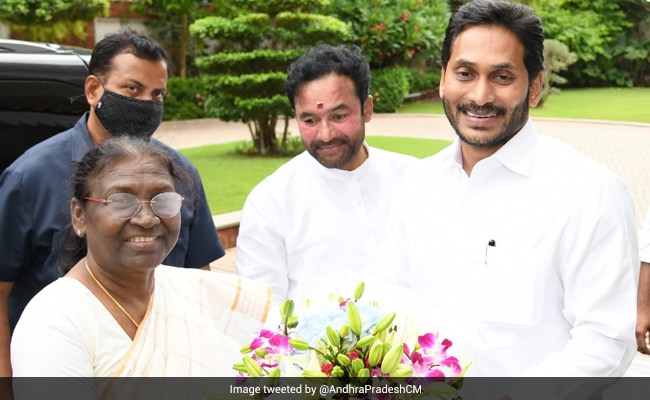 Droupadi Murmu began her address to the legislators in Telugu.

National Democratic Alliance's presidential candidate Droupadi Murmu met MPs and MLAs of Andhra Pradesh's ruling YSR Congress in Amaravti on Tuesday as part of her election campaign and requested them to "bless and support me".

Accompanied by Union Tourism and Culture Minister G Kishan Reddy, Ms Murmu arrived here in the afternoon and drove to Chief Minister Y S Jagan Mohan Reddy's residence at Tadepalli, where he hosted tea for her.

Vedic priests from the Kanaka Durga temple in Vijayawada bestowed 'veda aasirvachanam' on Ms Murmu on the occasion.

She then went to the CK Convention Centre at Mangalagiri for a meeting with the ruling party parliamentarians and legislators.

"Andariki namaskaraalu", Ms Murmu began her address in Telugu, greeting all those present.

She spoke about the "glorious history" of Andhra Pradesh, its poets, warriors and freedom fighters and paid tributes to them.

"I am a tribal leader from a remote village in Mayurbhanj district in Odisha. Andhra Pradesh and Odisha are neighbours and have many similarities in food habits, dress and customs. I belong to Santal community, one of the major tribes of India," she said.

Ms Murmu observed that her candidature (for the post of President of India) was the "manifestation of social justice and women empowerment".

"I request you all to bless and support your sister to see her in the highest constitutional post in the country in the 75th year of our independence. I thank Jagan Mohan Reddy for extending support (of his party) even before I requested," Murmu summed up.

The YSRC with 31 MPs and 151 MLAs has pledged its support to Murmu in the presidential election slated for July 18.

The opposition Telugu Desam Party with four MPs and 23 MLAs has also announced it will back the NDA nominee.

The lone MLA of Jana Sena, who has virtually defected to the YSR Congress, will also vote along.

In effect, all votes from Andhra Pradesh will go to Mr Murmu.