Ramdev on being caught dressed as a woman 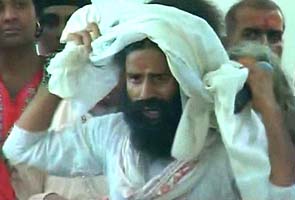 Haridwar: Baba Ramdev, who was caught in a dramatic fashion while trying to flee in a woman's attire from Delhi's Ramlila Maidan today, justified his act.

"It was not a sign of weakness to be in a woman's dress. A mother gives birth to a man," Ramdev said when asked at a press conference here about his act of shedding the saffron attire and posing as an injured woman in trying to escape from the protest site following the police crackdown.

The 46-year-old yoga guru almost gave the police a slip by jumping from the dais in Ramlila Maidan and vanishing into thousands of his supporters on Saturday night.

About two hours later, he was caught outside the protest site while posing as an injured woman wearing a white-coloured salwar suit with his head covered with a dupatta. At the time of arrest, he was pretending to be moving with the support of two women around whom he put his arms.

Ramdev lashed out at Delhi Police, alleging its personnel attacked innocent women and children. "Lobbing teargas shells in a closed shamiana were the most violent act of the police," he said and alleged "police did not allow any injured person to stay in hospitals."

To a question, he said "I have respect for Prime Minister Manmohan Singh on a personal level but he did not discharge his national duty."

Promoted
Listen to the latest songs, only on JioSaavn.com
He referred to the Supreme Court taking suo motu notice of the crackdown and thanked it.

Human rights organisations and the National Commission for Women should also take note of the "atrocities" committed against innocent people including women and children at Ramlila ground, Ramdev said.