Dau Dayal and Iqbal Mistri say this is the first time they have worked on a bell of this size. 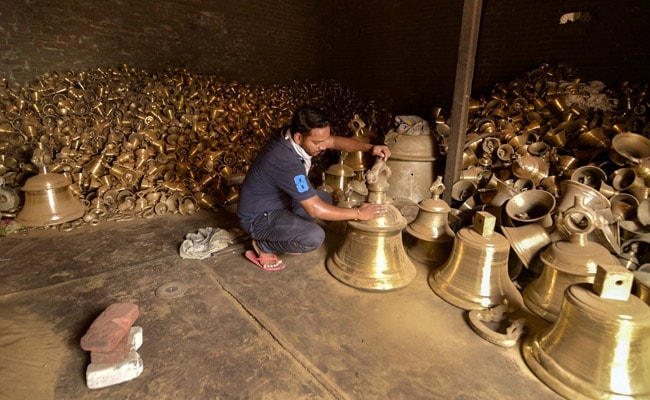 Dau Dayal has been making bells of varied shapes and sizes for more than 30 years.

Dau Dayal has been making bells of varied shapes and sizes for more than 30 years, but what he and his team has pulled off this time has surprised everyone in Uttar Pradesh's Jalesar town -- a bell weighing 2,100 kg for the Ram temple in Ayodhya.

Mr Dayal and his collegue Iqbal Mistri (craftsman) say this is the first time they have worked on a bell of this size.

"When you work on a bell of this size, the difficulty levels increase manifold," Mr Dayal, 50, a fourth-generation bell maker, says. "It's really hard to ensure you don''t make a single mistake in the months-long process."

"What excited us was that we were making it for the Ram temple, but fear of failure also remained at the back of our mind," he says.

"Success in such tasks is by no means guaranteed. The whole effort goes to waste even if there is a delay of five seconds in pouring the molten metal into the mold," according to Mr Mistri.

"What's unique about it is that it is just one piece, from top to bottom. It doesn't have multiple pieces welded together. This is what made the task much more difficult," the 56-year-old says, revelling in his achievement.

The bell is not just brass, but made of "ashtadhatu", a combination of eight metals -- gold, silver, copper, zinc, lead, tin, iron and mercury.

"This piece, which is one of the largest bells in India, will be donated to the Ram temple," says Vikas Mittal, the chairman of Jalesar municipal council in Etah district and the owner of the workshop where the bell has been manufactured.

The Mittals got the order to prepare a 2,100-kg bell from the Nirmohi Akhara -- a litigant in the Ayodhya title dispute -- immediately after the matter was decided last November, paving way for the construction of the temple.

"We believe there is some divine reason that this work came to us. So, we decided why don't we donate it to the temple," says Aaditya Mittal, the chairman's brother, adding that it cost them Rs 21 lakh.

From initial planning to design finalisation to manufacturing, the entire process took around four months. "A final touch is needed before it is on its way to Ayodhya," Shubham Mittal from the family says.

The casting of a bell involves multiple, lengthy steps -- determining the shape and measurement painstakingly, cutting out wooden templates to make the mold, preparing metal, tuning, grinding, and fitting the clapper.

A crane was used to pour the alloy into the mold.

A team of around 25 workers, Hindus and Muslims both, worked for a month, eight hours a day, to make what could be "among the largest bells" in the country.

Before this, Mr Dayal had cast a 101-kg bell that is being used at the Kedarnath temple in Uttarakhand.

"This is the largest and the heaviest bell we have worked on so far. We had also cast a 1,000-kg bell for Mahakaleshwar Temple in Ujjain," he says, as he prepared material to cast a regular six-inch bell used in temples and schools.

The Mittals had also presented a 51-kg bell to Yogi Adityanath, when he came to Etah to address his first public meeting after becoming the chief minister, according to the family.

Jalesar's brass craft has also earned it benefits under the Adityanath government's "one district-one product" scheme.

It aims to encourage indigenous and specialised products and crafts in the state that are found nowhere else -- like the ancient and nutritious ''kala namak'' rice, wheat-stalk craft, and chikankari and zari-zardozi work on clothes.