Why Does Andhra Need 3 Capitals When State Like UP Has 1, Asks Ram Madhav

Ram Madhav warned that the three capitals should not become a means for "triple corruption". 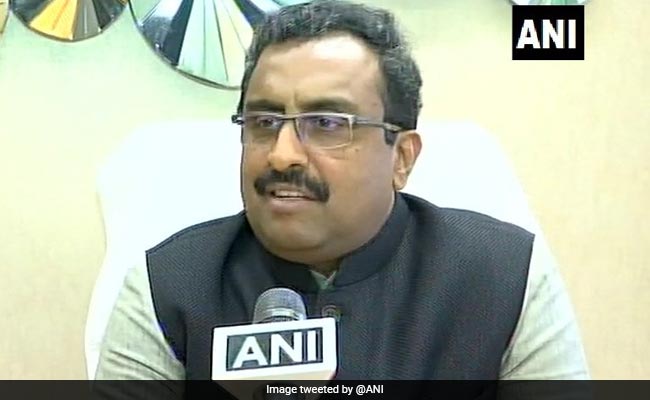 BJP national general secretary Ram Madhav on Tuesday wondered why three capital cities were needed for Andhra Pradesh when a state like Uttar Pradesh, four times more in population, had only one.

He warned that the three capitals should not become a means for "triple corruption" and exhorted the BJP rank and file in AP to fight against corruption and also be in the forefront of the fight to protect the interests of Amaravati farmers who gave up their land for the capital city development.

Mr Madhav maintained that the Centres role in the capitals issue was only limited.

"Even now if the state wants to take some decision on the capital, the Centres role in that will only be limited. But it doesn't mean..if they want to build three capitals, it should not be questioned," he said, addressing a BJP event in Vijayawada on Tuesday.

He observed that the three capitals issue was now sub-judice (under judicial consideration).

The Union Ministry of Home Affairs filed a counter-affidavit in the High Court last week on the YS Jagan Mohan Reddy governments decision to establish three capitals for the state Executive in Visakhapatnam, Legislative in Amaravati and Judicial in Kurnool.

"The Centres stand is a constitutional response. Lets see what the courts decide," Mr Madhav said.

The BJP general secretary recalled that Hyderabad was supposed to be the joint capital (of AP and Telangana, post-bifurcation in 2014) for 10 years but the previous Chief Minister (Chandrababu Naidu) "came running" to Vijayawada.

"It was no interference from the Centre. It only fulfilled its responsibilities," he pointed out.

"Which Indian state has three capitals? UP has four times more population than AP but has only one capital, Lucknow. Is not the administration there running smoothly," he asked.

"This should not become a tool for triple corruption. BJP should be in the forefront in the fight to protect the interests of Amaravati farmers (who gave up their lands). The three capitals should not lead to corruption," he stressed.