Raksha Bandhan 2019: Ishrat Jahan, however, lamented that she could not hand over the container of ''rosogolla'' that she had taken for the PM. 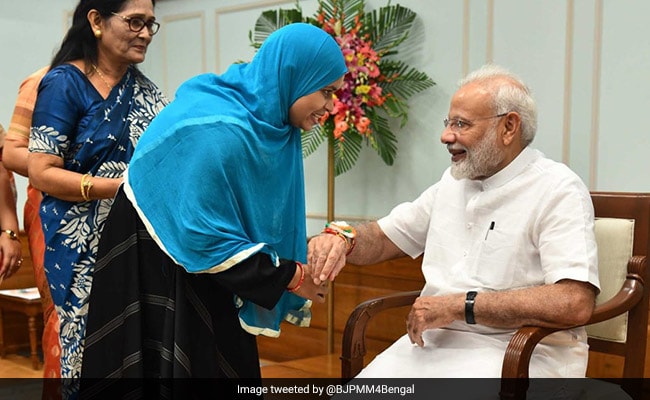 Ishrat Jahan, one of the key petitioners in the triple talaq case, tied a rakhi on the wrist of Prime Minister Narendra Modi on Thursday and thanked him on behalf of Muslim sisters for making the Islamic practise illegal.

Ishrat Jahan, who tied a Tricolour rakhi on PM Modi's wrist in Delhi, said she was "delighted" to have got the opportunity. Independence Day this year coincided with Raksha bandhan.

"I thanked the prime minister on behalf of all my Muslim sisters for his initiative to make the practice of instant triple talaq illegal. The PM, in his reply, said it was our right and we should be getting it," Ms Jahan told PTI over phone.

President Ram Nath Kovind had on August 1 gave his assent to Muslim Women (Protection of Rights on Marriage) Bill, 2019 passed by Parliament, turning it into a law.

The law makes it illegal to pronounce talaq three times in spoken, written or through SMS or WhatsApp or any other electronic chat in one sitting.

Ms Jahan, however, lamented that she could not hand over the container of ''rosogolla'' that she had taken for the PM.

"Due to security reasons, I could not give him (PM Modi) the rosogolla that I had brought from Kolkata. However, I am delighted to have got this opportunity of tying rakhi on the PM's wrist," she said.

Mother to a 14-year-old daughter and 8-year-old son, Ms Jahan is one of the five petitioners in the Supreme Court against instant triple talaq. She is a resident of Howrah district of West Bengal.

She had moved the top court after her husband divorced her over phone from Dubai by uttering the word ''talaq'' thrice consecutively in 2014.

The practice of instant triple talaq was struck down by the Supreme Court on August 22, 2017.