As the Rajya Sabha marked its 250th session, the marshals were seen in new uniforms that many said resembled that of the armed forces

Military-like uniform for marshals in the Rajya Sabha, which debuted on the opening day of the winter session of parliament on Monday to much criticism, is being reconsidered. Vice President Venkaiah Naidu, the chairman of the Rajya Sabha, declared today that he had asked his secretariat to revisit the uniforms.

As the Rajya Sabha marked its 250th session, the marshals were seen in new uniforms that many said resembled that of the armed forces.

The uniforms were navy blue, with shoulder insignias, gold buttons and gold aiguillette - ornamental braided cord worn on army or academic uniforms. The peaked cap was like those worn by Army officers of the rank of Brigadier and above.

Earlier, the marshals wore white bandhgalas with a safa.

Union Minister VK Singh, a retired general of the Indian Army, agreed with the criticism.

The Congress's Jairam Ramesh was heard asking Venkaiah Naidu whether "martial law" has been imposed in the Rajya Sabha. 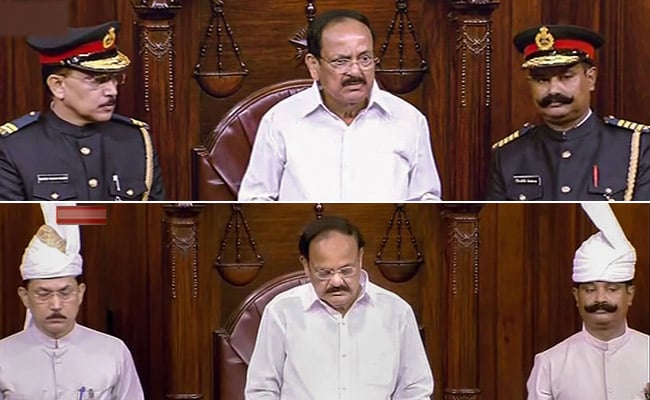 In the Lok Sabha, marshals are summoned to maintain order or remove recalcitrant members, the function of their Rajya Sabha counterparts is mostly ceremonial. They have to march before the chairman or the presiding officer of the house at the beginning of the proceedings. They also help with getting documents, removing them or arranging them.

Reports suggested the change of uniform was driven by the belief that Rajya Sabha marshals should have a distinct identity, separate from watch and ward staff in parliament.