At noon, the Question Hour is announced and if the disruptions recur, the proceedings are adjourned again. 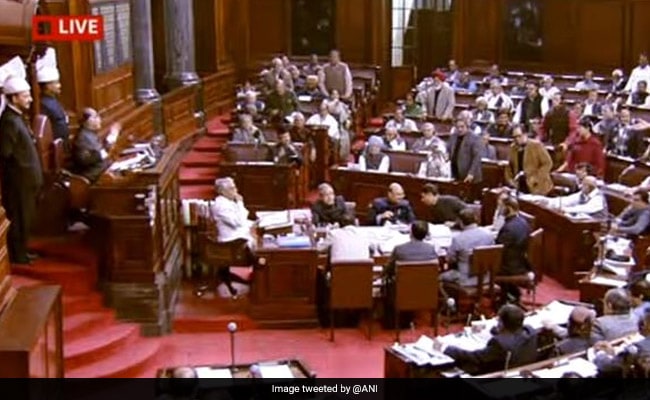 New Delhi: Irked over slogan shouting by opposition MPs from the Well, Rajya Sabha Chairman M Venkaiah Naidu today adjourned proceedings till 1400 hours, an unprecedented move which even saw the Question Hour not being taken up.

The proceedings begin at 1100 hours with the tabling of the listed papers, after which the Zero Hour is held where members raise issues of public interest. The Question Hour, where MPs can ask the government questions about various policies takes place at noon.

Usually when the proceedings are disrupted soon after the House assembles for the day, the Chair adjourns the proceedings for shorter durations, generally till 1200 hours.

At noon, the Question Hour is announced and if the disruptions recur, the proceedings are adjourned again.

But today, when Samajwadi Party MPs trooped into the Well raising slogans against alleged encounter killings by the police in BJP-ruled Uttar Pradesh, Mr Naidu adjourned the proceedings straightaway till 1400 hours.

Members of the Aam Aadmi Party AAP too were in the Well, apparently raising the issue of sealing of commercial establishments in Delhi.

Congress member Ramachandra Rao too came into the Well holding a banner that read "Do Justice to Andhra Pradesh" in protest against the state not finding a mention in the Union Budget for 2018-19 presented last week.

Naresh Agrawal (SP) had given a notice under rule 267 seeking adjournment of proceedings to take up a discussion on the issue of fake encounters, which was rejected by Mr Naidu who said the matter could be raised through a different notice.

"I don't want to run the House like this," Mr Naidu remarked as SP, AAP and the lone Congress member trooped into the Well of the House.

"Let us not have an encounter of Zero Hour," he said as members shouted slogans. "This is not the way," he said an ordered that slogan shouting would not go on record.

He asked Mr Rao to go back to his place and sternly told Mr Agrawal, who insisted on being allowed to at least mention the issue, that "nobody can dictate" to him.

"You don't want the House to run. You don't want Question Hour," he told the agitated members as he called for Zero Hour mentions.

Derek O'Brien (TMC) rose to make his Zero Hour submission but nothing could be heard in the din.

An upset Mr Naidu remarked that the members were determined not to allow the proceedings and wanted to create trouble to get publicity. He then adjourned the proceedings till 1400 hours.
Comments
Rajya Sabha adjournedRajya SabhaVenkaiah Naidu