Rajnath Singh made the comments after the Pune Police earlier in the day intercepted an internal communication of the Maoists revealing plans of a 'Rajiv Gandhi-type' assassination of Prime Minister Modi. 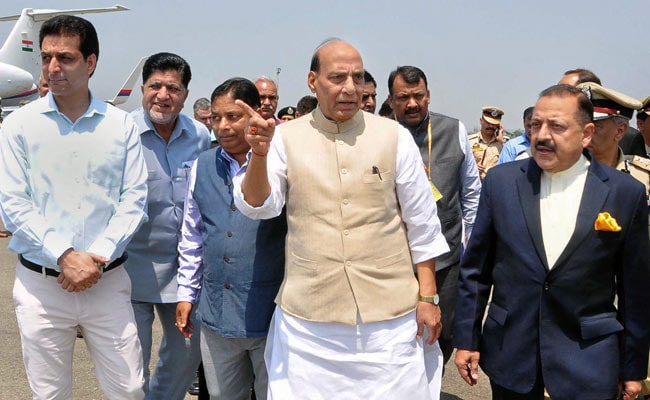 Jammu: Union Home Minister Rajnath Singh on Friday said that the security and safety of Prime Minister Narendra Modi was a topmost priority for everyone and the ministry is cautious about it.

Mr Singh made the comments after the Pune Police earlier in the day intercepted an internal communication of the Maoists revealing plans of a 'Rajiv Gandhi-type' assassination of Prime Minister Modi.

Addressing a press conference on his two-day visit to Jammu and Kashmir to review the security situation, Mr Singh said, "We are always concerned about the security of our Prime Minister. Maoism and extremism have now been reduced by many folds. Maoists are just fighting a lost battle."

The Home Minister espoused that the number of Naxal-affected districts has come down from 175 districts to 90 districts in the last four years under the Bharatiya Janata Party (BJP)-led government, adding that Maoist-related violence has come down drastically.

Mr Singh further said, "I will still say that there are roughly just 10 districts in the country that is the most affected by Maoist extremism."

He cited the example of the insurgency in North-East India, saying that the menace has been finished and there were no cases of extremist-related violence in the region in the last four years.

"85 percent extremism has been reduced in the North-East in the last four years. Our security agencies are present and active round-the-clock to ensure that no untoward incidents happen there," he said.

Earlier, the Pune Police told a court on Thursday that they seized the letter with the Prime Minister's assassination bid from the residence of one of the five persons they had arrested in connection with the Bhima-Koregaon violence.

"Modi-led Hindu fascism is bulldozing its way into the lives of indigenous Adivasis. In spite of big defeats like Bihar and West Bengal, Modi has successfully established BJP government in more than 15 states. If this pace continues, then it would mean immense trouble for the party on all fronts. Greater suppression of dissent and more brutal form of Misson 2016 (OGH)," the letter read.

"Com. Kisan and few other senior comrades have proposed concrete steps to end Modi-raj. We are thinking along the lines of another Rajiv Gandhi type incident. It sounds suicidal and there is a good chance that we might fail, but we feel that the party PB/CC must deliberate over our proposal. Targeting his road-shows could be an effective strategy. We collectively believe that survival of the party is supreme to all sacrifices," the letter stated.

In a press conference on Thursday, Pune Joint Commissioner of Police (CP) Ravindra Kadam said that during the investigation the police recovered "pen drive, hard disk and some other documents" which were later sent to forensics.

Promoted
Listen to the latest songs, only on JioSaavn.com
Former prime minister Rajiv Gandhi was assassinated on May 21, 1991, in Sriperumbedur, Tamil Nadu, by a suicide bomber from neighbouring Sri Lanka while on a campaign trail.