Rajnath Singh wrote an "Om" on the jet and offered flowers and a coconut on the fighter jet in France's Merignac before going on a sortie of the much-awaited Rafale jet. 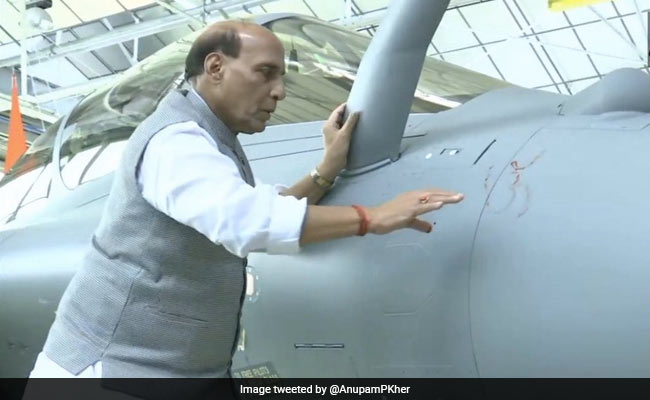 Defence Minister Rajnath Singh on Tuesday performed Shastra Puja - a ritual in which  weapons are worshipped - after receiving the first of the 36 Rafale jets in the French port city of Bordeaux on the festive occasion of Vijayadashami, a widely celebrated festival of the country.

Mr Singh wrote an "Om" on the jet and offered flowers and a coconut on the fighter jet in France's Merignac before going on a sortie of the much-awaited jet.

The Defence Minister later shared pictures online and wrote that worshipping weapons on Vijayadashami has been an Indian tradition.

Taking to Twitter, Mr Singh said, "Performed Shastra Puja on the auspicious occasion of Vijayadashami. Worshipping weapons on Vijayadashami has been our tradition."

Taking a sortie in Rafale was a memorable and once in a lifetime experience. The induction of Rafale will go a long way in strengthening our national defence.

India will receive the first 18 Rafale jets by February 2021. By April-May 2022 we will receive all 36 jets. pic.twitter.com/we4UeSwdG5

Mr Singh accepted the handover at a facility of Rafale manufacturer Dassault Aviation at Merignac in the presence of Florence Parly, the French Minister of Armed Forces. The members of the top military brass of France, senior officials of Dassault Aviation and the makers of Rafale were also present during the Shastra Puja ceremony. The ceremony coincided with the foundation ceremony of the Indian Air Force.

"It is a historic day and shows deepening ties between India and France," Mr Singh said at the handover ceremony for the Rafale aircraft.

"Rafale will add to the strength of IAF. Our focus is to enhance the capability of IAF. We are sure that all timelines would be adhered to, be it jets or weapon systems," Mr Singh said.

He also said the occasion signifies the depth of the strategic partnership between India and France.

"It is a historic and landmark day for the Indian armed forces. This ceremony signifies the depth of the strategic partnership between India and France," he added.

The Defence Minister also went for a sortie in the aircraft -- a process that was also meant to test the India-specific adaptations made.