The first batch of four Rafale jets - part of the Rs 59,000-crore deal made in September 2016 - is expected to arrive in India next May. The rest of the aircraft will arrive by September 2022. 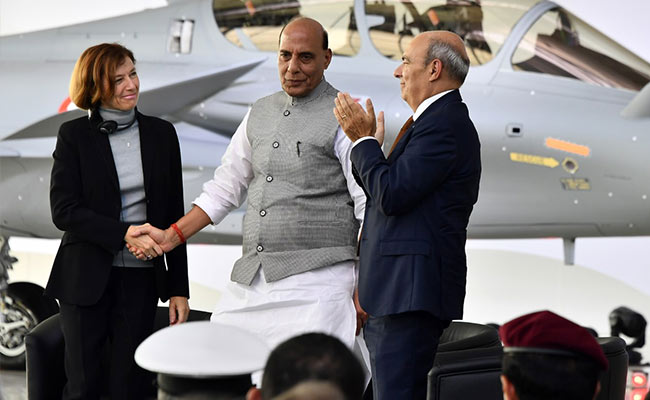 Union Defence Minister Rajnath Singh on Tuesday alluded to the meaning of Rafale to explain how the multi-role fighter jets purchased from France will strengthen the Indian Air Force and improve bilateral relations in the decades to come.

"I am told that Rafale is a French word, meaning gust of wind. I am sure that the aircraft will live up to its name. Our air force is the fourth-mightiest in the world, and I believe that acquisition of Rafale fighter jet will further boost India's dominance of the skies to ensure peace and security in the region," he said at an event in Dassault Aviation's Bordeaux facility, shortly before he received the first of 36 Rafale fighter jets expected to be delivered to India over the next three years.

The first batch of four Rafale jets - part of the Rs 59,000-crore deal made in September 2016 - is expected to arrive in India next May. The rest of the aircraft will arrive by September 2022, for which the Air Force has been making preparations.

In his address, Rajnath Singh said it was fitting that the aircraft be handed over on Dussehra, a day that marks the victory of good over evil, and the 84th anniversary of the Indian Air Force. "The Rafale deal was signed between India and France on September 23, 2016. Our Rafale monitoring team has been positioned here since August 2017 to ensure smooth implementation of the project. The Rafale jets will add to the strength of our air force," he added.

Rajnath Singh, who also undertook a sortie in the aircraft for a first-hand look at its workings, had earlier met French President Emmanuel Macron at the Elysee Palace to discuss ways to enhance Indo-French defence ties. This aspect found mention in his address at the handover ceremony too.

"Our focus is on equipping our Air Force and enhancing its capabilities. We are certain that France will meet the delivery timelines for all 36 Rafale aircraft, besides related equipment and weapon systems," the Defence Minister said, adding that the deal will pave the way for stronger ties between the two countries and help realise their common aim of establishing peace and unity across the globe.