Ashok Gehlot has 109 MLAs on his side. The Chief Minister needs 101 MLAs to vote for him in the assembly to retain power. 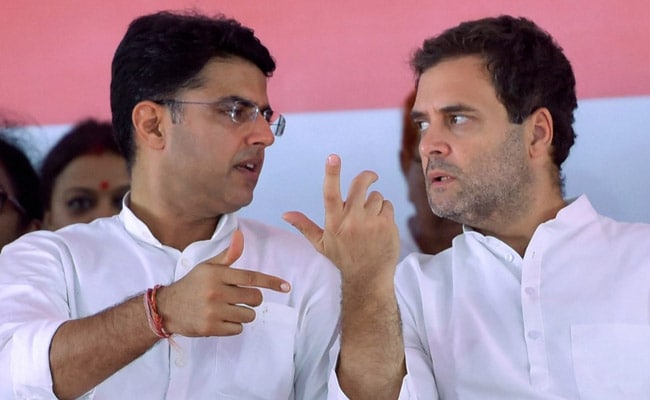 The Rajasthan High Court has said Sachin Pilot and 18 other Congress rebels in the state cannot be disqualified by the Speaker at least till Tuesday. Team Pilot's challenge to disqualification notices from the Speaker will be heard again on Monday.

This morning, the Congress suspended two of the rebels alleging that they had been caught on tape conspiring with the BJP against their own government. The Congress also named Union Minister Gajendra Singh Shekhawat, who has called the audio "fake". Two police cases were filed on the allegations. Hours before the hearing, the Congress held a press conference where it released transcripts of alleged audio conversations of deal-making between rebel MLAs and the BJP to try and dislodge the Ashok Gehlot government in Rajasthan.

"The Modi govt and BJP are conspiring' to grab power instead of fighting the coronavirus pandemic," Congress leader Randeep Surjewala said, reading out transcripts of audio conversations allegedly featuring rebel MLAs. "Sachin Pilot should clarify his stand," he added.

Ashok Gehlot has 109 MLAs on his side. The Chief Minister needs 101 MLAs to vote for him in the assembly to retain power.

Mr Pilot, on the other hand, claims at least 20 MLAs are with him. Some 16 were seen at a hotel in Manesar near Delhi, which has been the base station for Congress rebels.

The BJP has 73 MLAs and needs around 30 more to topple the government.

Here are the Live Updates on political developments in Rajasthan:

Jul 17, 2020 23:29 (IST)
Sachin Pilot Said Must Be Named Chief Minister In A Year: Sources
Sachin Pilot repeatedly asked to be made Chief Minister of Rajasthan within one year and refused to meet with Congress chief Sonia Gandhi and son Rahul Gandhi unless they were ready to accept his demand, sources close to party leader Priyanka Gandhi Vadra said.
The statement came as a rebuttal to one from Mr Pilot's camp that he was unceremoniously sacked as Deputy Chief Minister three hours after a phone conversation on Tuesday with Ms Vadra who has been trying to convince the 42-year-old to walk back his mutiny.
Jul 17, 2020 19:46 (IST)

Haryana: The team of Special Operations Group (SOG) of Rajasthan Police that was waiting outside the resort in Manesar where Congress MLAs are staying, has been allowed to enter the resort. pic.twitter.com/Nh7kCmTgIV

Hearing before Assembly Speaker (on notice issued to Sachin Pilot & other MLAs) that was scheduled to be held today has been deferred till 5:30 pm Tuesday. No action can be taken against MLAs till then: Lawyer Prateek Kasliwal, who is representing Speaker CP Joshi at Rajasthan HC pic.twitter.com/s41iNiPDAt

Jul 17, 2020 16:42 (IST)
Rajasthan Police Reaches Camp Pilot In Manesar In Search Of MLA
A team of the Rajasthan Police has reached two resorts in Manesar, near Delhi, where 18 Congress legislators have been camping since the weekend. For now, the person of interest among them as far as the police is concerned Bhanwar Lal Sharma, who, according to the Congress party, is heard on tape discussing bribes from the BJP as part of a conspiracy to bring down the Rajasthan government headed by Ashok Gehlot.
Jul 17, 2020 15:47 (IST)
Sachin Pilot Sacked 3 Hours After Priyanka Gandhi Vadra's Call: Sources
"Sachin Pilot spoke with Priyanka Gandhi Vadra, was given patient hearing, and sacked 3 hours later," sources close to him tell NDTV.
Jul 17, 2020 14:30 (IST)

Congress's Jitendra Singh On Sachin Pilot: Sometimes Young Leaders Forget Their Oath
The Congress government in Rajasthan is secure and has the numbers to prove a majority despite the open revolt led by former Deputy Chief Minister Sachin Pilot, senior party leader from Rajasthan and former parliamentarian Jitendra Singh has told NDTV."
Jul 17, 2020 13:57 (IST)
Rajasthan Police heads to Manesar resort where Sachin Pilot, 18 rebel MLAs are camping
A team of the Rajasthan Police has left Jaipur for the fancy resort in Manesar, near Delhi, where 18 Congress legislators have been camping since the weekend. For now, the person of interest among them as fas the police is concerned  Bhanwar Lal Sharma, who, according to the Congress party, is heard on tape discussing bribes from the BJP as part of a conspiracy to bring down the Rajasthan government headed by Ashok Gehlot.
This morning, the Congress announced that it has suspended Bhanwar Lal Sharma and another MLA, Vishwendra Singh, who is also, according to the party, recorded while discussing cash transactions with the BJP.  They have denied the allegations and said the  taped conversations are not authentic. (Read full story here)
Jul 17, 2020 13:27 (IST)
JUSt IN: Rajasthan Police has left for resorts where Sachin Pilot and other rebel MLAs are camping
Jul 17, 2020 13:04 (IST)

Rajasthan Congress Crisis: P Chidambaram's Advice To Sachin Pilot In A Phone Call
Sachin Pilot spoke to senior party leader and former Union minister P Chidambaram on Thursday in a surprising move on a day he and other rebel MLAs took the party to court over disqualification notices served to them."
Jul 17, 2020 12:28 (IST)
Rajasthan High Court to hear Sachin Pilot camp's plea against disqualification notice at 1 pm
Sachin Pilot and 18 Congress rebels have challenged notices that warned them of disqualification if they did not satisfactorily explain by today why they defied the party. The court will hear the matter at 1 PM.
Team Pilot is being represented in the case by two of India's top lawyers -- Mukul Rohatgi, a former Attorney General, and Harish Salve, who has represented India in big international cases.
Jul 17, 2020 12:05 (IST)

I am ready to face any investigation. The audio doesn't have my voice: Union Minister, Gajendra Singh Shekhawat (file pic) https://t.co/lG4exVa14tpic.twitter.com/FFQUoHgzJL

Jul 17, 2020 12:02 (IST)
FIR against union minister filed shortly after Congress press conference
Rajasthan Police Special Operation Group (SOG), which reports to Chief Minister Ashok Gehlot, has filed an FIR against Union minister Gajendra Singh Shekhawat and rebel Congress MLA Bhanwar Lal Sharma. The SOG filed the FIR shortly after Congress press conference alleging an attempt by the BJP to topple the Ashok Gehlot government.
Congress spokesperson Randeep Surjewala said two audio recordings have surfaced in which Bhanwar Lal Sharma was heard in discussions with BJP leaders. The party claims one of the voices belongs to Mr Shekhawat, a senior BJP leader from Rajasthan and Union Minister for "Jal Shakti".
The audio tapes have been circulating online but the Congress did not play them at its media briefing; Mr Surjewala read out what he called were transcripts of the conversations.
NDTV cannot vouch for the authenticity of the audio tapes.
Jul 17, 2020 11:51 (IST)

Amidst a pandemic when people are suffering, thousands are dying & health infrastructure is crumbling, the BJP Govt at the centre is prioritising toppling democratically elected governments.

The tapes released by media today clearly reveal the disastrous intentions of BJP.

Jul 17, 2020 11:02 (IST)
FIR filed against Union Minister Gajendra Singh Shekhawat, Rebel Congress MLA
A case has been filed against union minister Gajendra Singh Shekhawat and rebel Congress MLA Bhanwar lal Sharma over allegations of a conspiracy against the Congress government in Rajasthan. The Congress in a press conference today alleged that investigations revealed rebel MLAs were plotting with the BJP against the Ashok Gehlot government.
The Congress has also suspended Bhanwar Lal Sharma and another rebel MLA, Vishwendra Singh, claiming audio proof that they were involved in deal-making to dislodge the party's government.
Mr Sharma has denied the allegations, saying that the voice in the audio tapes was not his. (Read full story here)
Jul 17, 2020 09:54 (IST)
Rebel MLAs Bhanwar Lal Sharma, Vishvendra Singh suspended from primary membership
Jul 17, 2020 09:36 (IST)

Sachin Pilot's Guide To Political Survival
Pilot is young - a mere 42 to Gehlot's 69 - and could be better served by waiting it out with the Congress. Rahul Gandhi has reportedly told him he will become Chief Minister at a later point but for now, it would be tough to send him back in Jaipur and risk Gehlot becoming a lame duck. Instead, Pilot could be given a pivotal position at the centre."
Jul 17, 2020 09:03 (IST)

Congress On Ventilator, No Plasma, Remdesivir Can Save It: AAP Leader Raghav Chadha
Amid the political turmoil in Rajasthan, the AAP on Thursday sought to project itself as an alternative, saying the Congress is on "ventilator" and is unlikely to survive while accusing the political parties of playing "dirty politics" at a time when the focus should be on battling the COVID-19 pandemic."
Jul 17, 2020 08:10 (IST)
What Abhishek Singhvi said on Sachin Pilot's phone call
Senior advocate Abhishek Singhvi on Thursday said Sachin Pilot had indeed called him up to seek his advice before taking the legal route regarding the Congress notice for disqualification of the rebel MLAs.
Mr Pilot had approached the court on Thursday, where he sought that the Speaker's notice to him and his 18 colleagues be struck down. He also asked that the Tenth Schedule of the Constitution, commonly known as the Anti-Defection law under which the disqualification notice was sent, be scrapped. (Read full details here)
Jul 17, 2020 07:58 (IST)
Mukul Rohatgi and Harish Salve to represent Sachin Pilot camp in court
Sachin Pilot and other Congress rebels have challenged in the Rajasthan High Court a move to disqualify them as MLAs. The Sachin Pilot camp are being represented by Mukul Rohatgi and Harish Salve, both top government lawyers in BJP regimes, in court. The Congress has fielded one of its sharpest legal experts, Abhishek Manu Singhvi.
By approaching the court, Sachin Pilot has "gone to a point of no return", the Congress said. Mr Pilot has not reacted positively to the Gandhi's outreach to him - sources said Priyanka Gandhi Vadra has reached out to him four times, while her brother Rahul Gandhi has also been in touch with him, but through emissaries.
Jul 17, 2020 07:56 (IST)
For all the yesterday's updates, click  here