"The Congress stands united," said the party at a press conference in Jaipur. 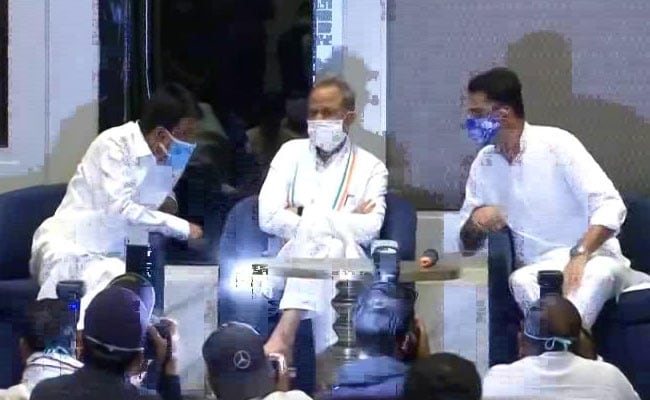 Ashok Gehlot said yesterday that the BJP was offering MLAs up to Rs 15 crore. (File)

"The Congress stands united," said the party at a press conference in Jaipur, where three MLAs who visited Delhi yesterday and are seen as part of the Sachin Pilot camp, also appeared.

Mr Pilot, however, claimed that he has the support of 30 MLAs in the state assembly. He is expected to meet BJP chief JP Nadda tomorrow, sources said, in a huge sign that he may be next to exit after Jyotiraditya Scindia.

The crisis in Rajasthan came three months after the Congress lost Jyotiraditya Scindia and Madhya Pradesh to the BJP -- a fallout of the tussle between the party's old guard and the new. Mr Pilot -- who lost the race for the Chief Ministership to veteran Ashok Gehlot in 2018 -- is believed to be in talks with the BJP since before the lockdown. The tipping point came after he was summoned for questioning by the Special Operations Group -- controlled by Ashok Gehlot's home ministry -- over allegations of destabilizing the government.

Ashok Gehlot had also said that the BJP is trying to grab power in the state by bribing MLAs.

Both Sonia and Rahul Gandhi have been briefed about the situation, sources said. "Sonia Gandhi will take a call on the matter and all must work together whatever the differences," the leader said.

Here are the LIVE updates on Rajasthan government crisis:

The crisis in Rajasthan Congress has deepened with state Chief Minister Ashok Gehlot and his deputy Sachin Pilot at loggerheads.
Jul 12, 2020 21:21 (IST)

BJP's Strategy Of Caution As Congress Confronts Desert Storm In Rajasthan
As the Congress confronts a desert storm in Rajasthan where the fight between Ashok Gehlot and Sachin Pilot has escalated, the BJP is playing it by ear, say sources. The party has decided that the feud between the Congress top two, which offers fertile grounds for a coup, should run its course." itemprop="description
Jul 12, 2020 21:07 (IST)
JUST IN
Sachin Pilot says 30 MLAs support him amid crisis in Rajasthan, won't attend Chief Minister's Congress meet tomorrow.
Jul 12, 2020 20:33 (IST)

Sachin Pilot Ghosts Congress, Leader Says: Left A Message
Rajasthan Deputy Chief Minister Sachin Pilot has been incommunicado for the last two days, Congress general secretary in-charge for the state Avinash Pande said on Sunday, as the party scrambled to contain the crisis triggered by Mr Pilot's revolt. However, all Congress MLAs are in touch and the Rajasthan government will complete its term, Mr Pande insisted." itemprop="description
Jul 12, 2020 20:11 (IST)
Madhya Pradesh Congress MLA Joins BJP, 6 Others May Follow: Sources
In yet another blow to the Congress, a party MLA in Madhya Pradesh joined the BJP, ahead of the state assembly bypolls on 24 seats. Pradyumna Singh Lodhi, a first-time legislator from the Bada Malahra seat, resigned from his Assembly membership after meeting with Chief Minister Shivraj Singh Chouhan and Uma Bharti.

Sources say around six more Congress MLAs from the Bundelkhand region may join the BJP in the coming days.

"Shri Pradyumna Singh Lodhi submitted his resignation on Saturday. I told him to think over it and not take decision in a haste. Today he again met me and requested to accept his resignation so we accepted the same," Madhya Pradesh Assembly Speaker Rameshwar Sharma said.
Jul 12, 2020 20:02 (IST)

Sad to see my erstwhile colleague, @SachinPilot too, being sidelined and persecuted by Rajasthan CM, @ashokgehlot51 . Shows that talent and capability find little credence in the @INCIndia .

Jul 12, 2020 18:09 (IST)
BJP trying to create atmosphere of uncertainty in Rajasthan: Congress leader
Congress General Secretary in-charge for Rajasthan Avinash Pande says all the Congress MLAs are in touch with him. "The government is stable and will last its full term," he tells news agency PTI.
"We are trying to reach out to Sachin Pilot and have left messages for him. Congress president Sonia Gandhi has been updated on developments in Rajasthan."
Mr Pande says everyone should cooperate with Rajasthan Special Operations Group. "There is no harm in joining probe. BJP is trying to destabilise Congress government in Rajasthan... attempting to create an atmosphere of uncertainty in Rajasthan, (BJP) will not succeed."
Jul 12, 2020 17:40 (IST)
Sachin Pilot's loyalists threaten revolt over investigating order: Sources
Sachin Pilot loyalists have threatened revolt following the investigating order. "Never before has sitting state president or a Deputy Chief Minister been served such letter," sources close to Mr Pilot said. "The high command has not done anything to intervene," they added.
Rajasthan Chief Minister Ashok Gehlot has pointed out that he has also received summons for questioning as well as the Chief Whip and it is their duty to cooperate. "No one is above the law," sources quoted him as saying.
Jul 12, 2020 17:19 (IST)
Sachin Pilot invited to meeting called by Ashok Gehlot: Sources
Ashok Gehlot's aides said they have invited Sachin Pilot to attend the meeting, but failed to contact him. "We have called this meeting to preempt the BJP, which keeps changing the rules of the game be it in Madhya Pradesh or Manipur," the sources said. "We are taking adequate precautions to ensure that all our MLAS are present," sources said.
Jul 12, 2020 15:45 (IST)
Ashok Gehlot calls meeting of Congress MLAs
Chief Minister Ashok Gehlot has called for a legislature party meeting at his residence at 9 pm today. Sources said the Congress high command is upset with him for issuing orders to question Sachin Pilot.
Jul 12, 2020 15:21 (IST)

Sachin Pilot And BJP Negotiations: 5 Points, According To Sources
The Congress government in Rajasthan is on the brink with deputy Chief Minister Sachin Pilot rushing to Delhi with MLAs loyal to him after his hostilities with Chief Minister Ashok Gehlot peaked in the last two days. Sources say Sachin Pilot, who also heads the Congress in Rajasthan, has been in talks with the BJP, which took power in two states earlier, enabled by high-profile defections from the Congress."
Jul 12, 2020 14:19 (IST)
BJP working as a political business in Rajasthan: Congress leader
Senior Congress leader PL Punia said while the BJP succeeded in toppling the government in Madhya Pradesh, it would fail to do so in Rajasthan.
Mr Punia told news agency ANI: "The BJP is working as a political business in Rajasthan. They are trying to purchase MLAs by offering them Rs 10-15 crore each as suggested by the Rajasthan Chief Minister. The police have arrested two persons, who were charged with trying to buy elected legislatures. It is very unfortunate."
"As many as 28 MLAs submitted a privilege motion, urging steps to be taken against the BJP. It is in its (BJP's) DNA to grab power by whatever means. They make use of agencies like CBI and ED to run after their rivals," he added.
Jul 12, 2020 13:47 (IST)
Worried for Congress: Kapil Sibal
Senior Congress leader Kapil Sibal has expressed concerns over the direction in which the party is heading.
"Worried for our party Will we wake up only after the horses have bolted from our stables?" Mr Sibal  has tweeted.

Worried for our party

Will we wake up only after the horses have bolted from our stables ?

Jul 12, 2020 13:29 (IST)
Sachin Pilot upset over summons for questioning
Sachin Pilot is deeply upset over summons for questioning by the Special Operations Group over allegations of destabilizing the government. Mr Gehlot heads the home ministry which controls law and order.
A letter asking Sachin Pilot to appear for questioning in an investigation into alleged attempts to destabilize the state government is believed to have pushed the Congress crisis to breaking point. Mr Pilot was summoned by the Rajasthan Anti-Terror Squad and the Special Operations Group on Friday over the complaint filed ahead of the Rajya Sabha elections byRajasthan Chief Whip Mahesh Joshi.
Jul 12, 2020 12:07 (IST)
"We are confident we won't allow a Madhya Pradesh situation to take place again," a senior leader in the party said. "There is an attempt being made to break our government. A lot of money is being given and promised by the Centre and the BJP," sources said.
Jul 12, 2020 12:07 (IST)
Sonia Gandhi to take a call on Rajasthan government issue
Both Sonia and Rahul Gandhi have been briefed about the situation, sources said. "Sonia Gandhi will take a call on the matter and all must work together whatever the differences," the leader said.