In photographs and a video shared this afternoon Mr Gehlot is greeted by several women MLAs, each of whom ties a rakhi on his wrist and then performs a small puja 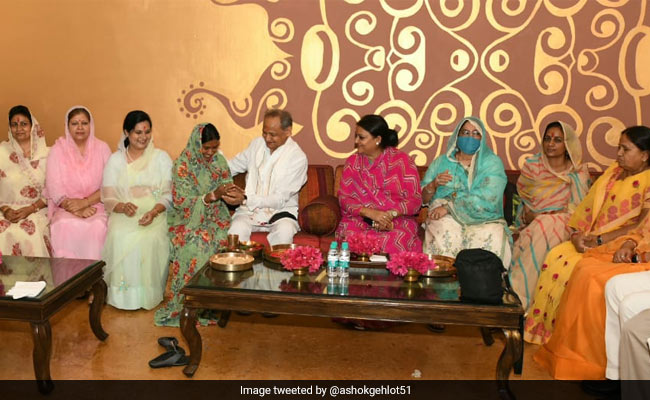 Rajasthan Chief Minister Ashok Gehlot on Monday took a brief break from the crisis surrounding his government to celebrate the festival of Raksha Bandhan, albeit with no apparent sign of social distancing in images posted to his Twitter account.

In photographs and a video shared this afternoon Mr Gehlot is greeted by several women MLAs, each of whom ties a rakhi on his wrist and then performs a small puja.

In some of the images the Chief Minister is seen offering a gift to some of the MLAs. In others, Mr Gehlot, dressed in a white kurta, is seen sitting on a red sofa as the MLAs, wearing saris of various hues, crowd around him.

Celebrated festival of #RakshaBandhan with the our MLAs.#HappyRakshaBandhanpic.twitter.com/I0lq5ZETJT

"Here in Jaisalmer, women legislators tied a rakhi on the holy festival of Raksha Bandhan. Wishing everyone all the best on this auspicious occasion," one of the tweets read.

"Celebrated festival of Raksha Bandhan with our MLAs," read another.

However, in the photos, neither the Chief Minister nor his MLAs, with the exception of one, can be seen either wearing face masks or practicing social distancing.

On Saturday Mr Gehlot wrote to Prime Minister Narendra Modi and asked him to "put an end to the tamasha (drama) in Rajasthan".

"Modiji is the Prime Minister of the country. People of the country gave him the chance (to lead the country) two times. He made people clap, clang utensils...people trusted him - it is a big thing. He must put an end to the tamasha (drama) in Rajasthan," he said.

The Congress government in the state is near collapse after open revolt by the disgruntled Sachin Pilot, who has claimed the support of 30 MLAs. However, of the claimed 30, only 19 have made their position official so far.

Mr Gehlot, on the other hand, says he has 102 MLAs in his corner - one over the majority mark. He is eager to hold a trust vote once the Assembly is in session next week and cement his position; if he wins he cannot be challenged for six months.

Both camps have stashed their MLAs at luxury resorts to guard against poaching. Mr Gehlot's MLAs have been moved to a resort in Jaisalmer.

The Assembly, to convene August 14, was called after a stand-off between the Chief Minister and Governor Kalraj Mishra, who turned down three proposals in 72 hours before Mr Gehlot agreed to the Governor's condition of a 21-day notice period.

Team Pilot MLAs, who are currently fighting Speaker CP Joshi's move to disqualify them, have told NDTV they will attend the Assembly session. If they do not, they will stand disqualified for defying a party whip.

The entire drama was set off after Ashok Gehlot alleged that Sachin Pilot, who has been sacked as his deputy, was directly involved in a conspiracy with the BJP to topple his government. Mr Pilot has denied all such allegations.