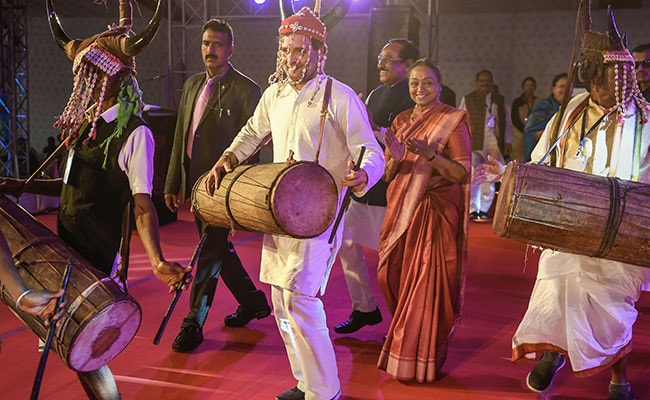 Rahul Gandhi danced with the members of the tribal community while beating a drum.

"This unique festival is an important step towards showcasing and protecting our rich tribal cultural heritage," he wrote on micro-blogging site Twitter.

Mr Gandhi, wearing a traditional red headgear, danced with the members of the tribal community while beating a drum.

"It is a very popular dance of Dandami madia tribe of Abujhamad in Bastar area and is also known as Gour dance. This dance is performed by a group of men and women. The men wear a bison horn crown and play the drum while dancing," the official page of the tribal festival tweeted.

Chhattisgarh Chief Minister Bhupesh Baghel and other top party leaders also shared the stage with Mr Gandhi and danced along with him.

The National Tribal Dance Festival is being organised in Chhattisgarh for the first time.

More than 1,350 participants from 25 states and Union Territories of the country and six countries will take part in this three-day dance fest and present folk art cultures, the state government said in a statement.

Per the programme itinerary, dance competitions based on traditional folk dance forms related to weddings and other customary rituals, traditional festivals, agricultural activities will be organised from 11:45 am on the first day.

On the third day of the event, Lashpa dance of Uttarakhand, Bakarwal dance of Jammu, Bhadam dance of Madhya Pradesh, Gaddi dance of Himachal Pradesh, folk dances of Karnataka and Sikkim, Damkach dance of Jharkhand, Dandami dance of Dantewada district in Chhattisgarh will be staged.