Rahul Gandhi said the Congress should be able to defeat the BJP in the Lok Sabha elections without giving in to hatred. 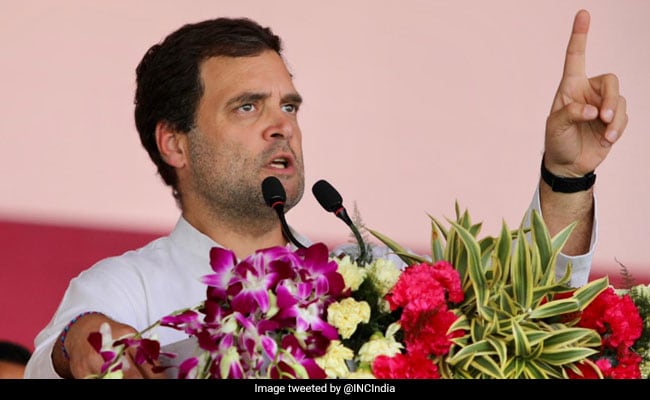 Rahul Gandhi said the Congress has only questioned Narendra Modi with love.

Congress president Rahul Gandhi today asked party workers to never use the word murdabad in connection with political adversaries, and instead win them over with love and affection. "Words like these are used by those from the BJP and RSS. We in the Congress do not use these words because we believe in love and affection," he told party workers at a meet in Rourkela.

According to news agency PTI, the Congress chief said this when several party leaders started shouting murdabad - roughly translating to "down with" - in response to him taking Prime Minister Narendra Modi's name during his address. He also said that using words like these against somebody who looks "visibly shattered after being exposed" before the country.

Mr Gandhi said the Congress should be able to defeat the BJP in the Lok Sabha elections without giving in to hatred.

"Wherever he (Modi) looks, there are farmers, workers, women and Rafale. Narendra Modi is now being cornered by all. There is a definite change in his face, mood and expressions. We have not done it with hatred. We have questioned him with love. We have done it by using love. We will defeat him," the Congress president said, adding that the Congress should use the same method to defeat the ruling Biju Janata Dal in Odisha.

Despite his commitment to defeat the BJP through love, the Congress president has been scathing in his attacks against PM Modi on the Rafale fighter jet deal. He has coined the phrase "The watchman is a thief" - the watchman being a reference to the Prime Minister - and accused the ruling BJP of changing the UPA-era deal to benefit industrialist Anil Ambani.

BJP's Statewide Tour For Karnataka Elections Getting Support: B Bommai