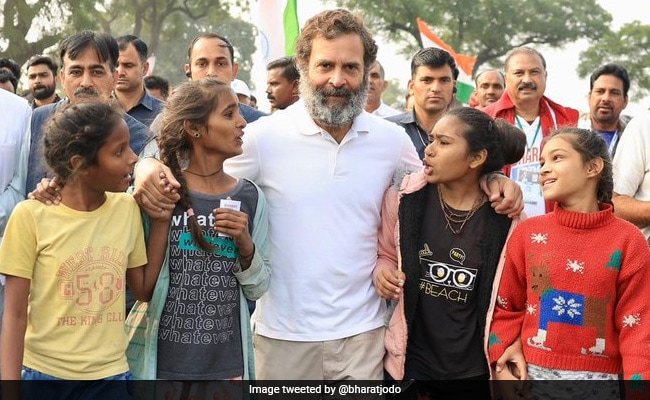 During the yatra, Gandhi interacted with about half a dozen children.

The 89th day of the yatra started from Kali Talai in Jhalrapatan, a rural area on the Rajasthan-Madhya Pradesh border.

Gandhi set off the yatra at 6.10 am when the temperature was 13 degrees Celsius, but he was seemingly comfortable walking in a half sleeves T-shirt and trousers teamed with sports shoes, while the other leaders and workers were seen in jackets.

During the yatra, Gandhi interacted with about half a dozen children and waved at a large number of people who participated in the yatra who called it a "fair". He sipped his morning tea at a dhaba.

During the yatra, former MP Raghuveer Meena felt uneasiness and he was taken to the district hospital in Jhalawar in an ambulance.

After covering about 14 km, the padayatra halted at Baliborda chauraha. It will resume after lunch from Nahardi area at 3.30 pm.

The Congress party tweeted in Hindi asking its members and supporters not to slow down but deliver "something amazing".

"Bharat Jodo Yatra has saluted the soil of bravery, and Rajasthan, which is a land of histories, will create another history,” the party tweeted.

The yatra entered Rajasthan from Madhya Pradesh on Sunday evening.

While Gehlot shared pictures on Twitter, Pilot took to the micro-blogging platform to convey that the yatra in the state started with a resolve to fulfil hopes and expectations of the youth.

Dotasara tweeted, "The caravan of Bharat Jodo Yatra led by Rahul Gandhi to tie India in the thread of love, harmony and unity has now set out to create history in Rajasthan." Rajasthan is the only Congress-ruled state where the yatra has entered and will cover about 500 km passing through Jhalawar, Kota, Bundi, Sawai Madhopur, Dausa and Alwar districts over 17 days before entering Haryana on December 21.

Gandhi will interact with farmers at Lalsot in Dausa on December 15 and address a public meeting at Malakheda in Alwar on December 19.

The yatra started from Kanyakumari in Tamil Nadu on September 7 and has so far covered the five southern states of Tamil Nadu, Kerala, Andhra Pradesh, Karnataka, and Telangana, and then traversed through Maharashtra and Madhya Pradesh.