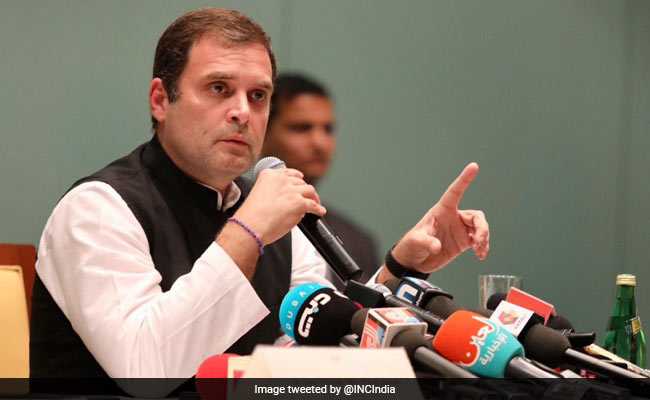 Rahul Gandhi has refused to be drawn into allegations of sexism against him.

Rahul Gandhi stood by his controversial remarks earlier this week targeting Defence Minister and Prime Minister Narendra Modi on the Rafale deal. The Congress president said he would have made similar comments had a man been there in place of Ms Sitharaman.

Addressing a press conference in Dubai, Mr Gandhi maintained his stand that PM Modi should have defended himself in parliament on the deal to purchase 36 Rafale jets from France.

"Prime Minister Narendra Modi has helped Anil Ambani steal Rs 30,000 crore and the House of the people Lok Sabha is where he should have defended himself but he chose to send another person and that person happened to be a woman. I would have made a very similar comment if it had been a man," news agency PTI quoted the Congress president as saying on Saturday.

Mr Gandhi also refused to be drawn into allegations of sexism against him. "Do not impose your sexism on me. I am very clear that the prime minister should have delivered that defence but he did not have the guts," he added.

A huge row broke out after after Rahul Gandhi, at a rally in Rajasthan on Wednesday, mocked PM Modi for not defending the Rafale deal in parliament.

"The watchman with a 56-inch chest ran away and told a woman, (Nirmala) Sitharamanji, defend me. I won't be able to defend myself, defend me. For two and a half hours, the woman could not defend him. I had asked a straight question - answer yes or no - but she couldn't answer," Mr Gandhi had said at the rally.

His comments drew a sharp response from the BJP. Union Minister Sushma Swaraj accused Mr Gandhi of marking a "new low" in Indian politics. Her colleague Smriti Irani followed with a tweet with the hashtag #MisogynistRahul.

Rahul Gandhi's comments on Defence Minister Nirmala Sitaraman's reply to a debate on a subject relating to Ministry of Defence is a new low in the history of Indian politics.

Mr Gandhi had tweeted a response that turned out to be another specimen of sexism. "Stop shaking, Be a man," he tweeted.

With all due respect Modi Ji, in our culture respect for women begins at home.

Stop shaking. Be a man and answer my question: Did the Air Force and Defence Ministry object when you bypassed the original Rafale deal?

Yes? Or No? #RafaleScam

The National Commission for Women also intervened in the matter and issued notice to the Congress president, with its chief calling his remarks "pathetic, sexist and misogynistic".

Mr Gandhi has been accusing the prime minister of avoiding the debate and leaving the minister to defend him.