Nearly a week after his surprise tractor ride to parliament to back the agitation against new farm laws, Rahul Gandhi, 51, this morning rode a cycle to protest against the issue of fuel price hike.

Rahul Gandhi rode a cycle to parliament today; other opposition leaders joined him.

Congress leader Rahul Gandhi led a meeting of opposition leaders this morning - the second in a week - amid disruptions and protests in parliament over the Pegasus snooping row, the handling of the pandemic, and farmers' agitation, among other issues. Today's breakfast meeting was called to discuss the option of holding a "mock parliament" outside.

Nearly a week after his surprise tractor ride to back the agitation against new farm laws, Mr Gandhi, 51, this morning rode a cycle to parliament to protest against the issue of fuel price hike. He was joined by several other opposition leaders.

"One of the ways to draw the attention (of the government) to the issue is by cycling to parliament. People of India are struggling..." Mr Gandhi said at the breakfast meet. 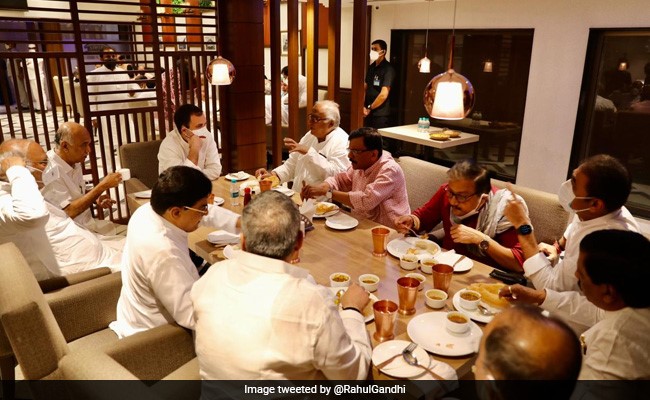 Rahul Gandhi tweeted a photo of the opposition leaders having breakfast together.

Speaking at the Constitution Club of India in the national capital, the Congress leader said, "The single most important thing in my view is that we unite this force. The more this voice (of the people) unites, the more powerful this voice will become, the more difficult it'll become for BJP-RSS to suppress it."

Trinamool Congress's Mahua Moitra, the NCP's Supriya Sule, Shiv Sena's Sanjay Raut, and the DMK's Kanimozhi were among the leaders attending the breakfast meeting as they united against the government. "We are witnessing something special here," Congress MP Shashi Tharoor tweeted.

After a sumptuous breakfast, leaders of eleven Opposition parties spoke briefly about the importance of unity in Parliament and on the ground in the struggle against the anti-people policies & undemocratic actions of the BJP government. We are witnessing something special here. pic.twitter.com/MNtOcocMmF

AAP MP Sanjay Singh, who skipped the breakfast meeting, said, "Attending or not attending (the meet) is not important. Whenever a discussion is held in parliament, we will support the farmers and raise the issue of snooping row."

Hours after the cycle ride, Mr Gandhi tweeted in Hindi: "Our face or name is not needed. All that's important is that we're representing people. In every face are crores of faces who are fed up with inflation." He also used the Prime Minister's poll promise of "Acche Din" (better days) to hit back at him, "Yehi hain acche din (Are these the good days)"."  In another tweet on the opposition meeting, he said: "One priority- our country, our people."

Union Minister Rajnath Singh had dialled up the Congress's Mallikarjun Kharge, the leader of the opposition in Rajya Sabha, on Monday afternoon to seek his support amid protests, sources said. The government should allow discussions in parliament, Mr Kharge had told him.

While the monsoon session of parliament began on July 19, parliament has functioned for only 18 hours out of possible 107 hours in the first two weeks. More than Rs 133 crore in taxpayer money has been lost because of disruptions, government sources said on Saturday.

The opposition has been demanding a Supreme Court-monitored probe into the Pegasus snooping row and the allegations that Congress MP Rahul Gandhi, poll strategist Prashant Kishor, judges, activists and even ministers were potential targets of an Israeli spyware.

The government has dismissed these demands, saying a statement read out in parliament by IT Minister Ashwini Vaishnav - one of the potential targets of the hacking - was sufficient. For days, the BJP has laboured to label the snooping of the phones a "non-issue".

Last week, Rahul Gandhi addressed a meeting of 14 opposition parties. "The entire opposition is here... our voice is being curtailed in parliament. We are only asking if the Pegasus software was bought and if it was used against certain persons in India," Mr Gandhi later asked, addressing the media.

"I want to ask the people - there is a weapon Narendra Modi has planted in your phones... used against opposition leaders, journalists, activists... should there not be a discussion in Parliament?" he questioned.

Shiv Sena MP Sanjay Raut, who was part of the meeting, stressed the opposition is "united in our stand to protect issues of national security, democracy and farmers' welfare".

Disclaimer: The NSO group, which owns Pegasus, admits this is spyware and is used to hack phones, but says it does business only with governments and government agencies. The Israeli company says it does not corroborate the list of potential targets reported by media companies around the world. The Indian government has said there is "no substance" to the reports of Pegasus being used by it against opposition leaders, journalists and others. NDTV cannot independently verify the authenticity of the list of those who were supposedly targeted.