"Whose Pockets Are Being Filled With High Prices?" Asks Rahul Gandhi 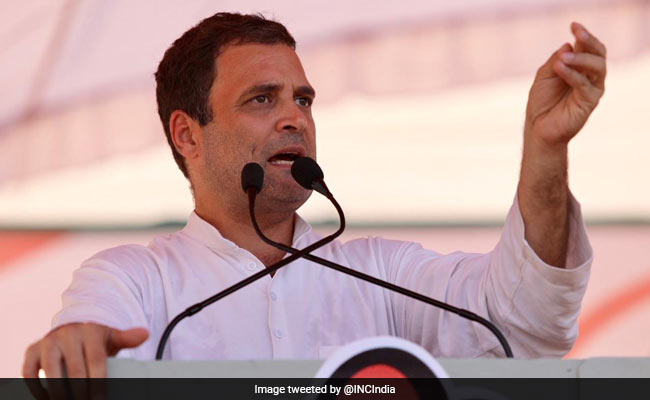 Congress president Rahul Gandhi on Friday questioned the silence of Prime Minister Narendra Modi over the soaring fuel prices and asked "whose pockets are being filled" because of this.

He also attacked Prime Minister Narendra Modi's government, once again, over the Rafale fighter plane deal before wrapping up his two-day visit to the poll-bound Madhya Pradesh.

"Crude oil prices were 140 dollar per barrel in international market during the UPA regime. These rates have come down to 70 dollars (in global market) now. But, the prices of petrol and diesel in India have been going up," Mr Gandhi told a gathering at Baikunthpur of Madhya Pradesh's Rewa district.

He went on to ask, "Whose pockets are being filled with high prices? Why is the prime minister not speaking on price rise of petrol and diesel?"

Taking a dig at the Prime Minister, Mr Gandhi said, "Narendra Modi used to ask the people (during his speeches) whether they are getting petrol at Rs 50 now. Yes, the people are getting half-a-litre petrol in Rs 50 now."

The Congress leader said the Modi government has ignored the interests of farmers but helped a small group of industrialists by waiving loans amounting to nearly Rs 1.5 lakh crore.

Turning to the Rafale figher issue, he said during the UPA rule, the contract related to the deal was given to state-owned Hindustan Aeronautics Limited (HAL) so that it could help create jobs.

"But the Modi government gave this deal to industrialist Anil Ambani and hiked the planes procurement price," Mr Gandhi alleged.

"When we asked about the price, Defence Minister Nirmala Sitharama lied that there was a secret clause. But, French President said that there is no such secret pact," he charged.

Mr Gandhi claimed that Mr Ambani had not manufactured even a single aircraft but was awarded a contract of Rs 30,000-crore after "snatching" the work from HAL.

Mr Ambani has already rejected Rahul Gandhi's allegations and emphasised that the government had no role in the Rafale-manufacturer French company Dassault picking up his company as a local partner.

He had written to Mr Gandhi on December 12, 2017, refuting allegations of his Reliance Group lacking experience to get the Rafale fighter jet deal.

Mr Gandhi also alleged that Finance Minister Arun Jaitley had helped industrialist Vijay Mallya in escaping from the country after defaulting on loans to the tune of thousands of crores but PM Modi doesn't utter a word.

Mr Gandhi also attacked the BJP government in Madhya Pradesh, saying the roads in the state are full of potholes but Chief Minister Shivraj Singh Chouhan claims that they are better than those in the United States.

"As Shivraj comes on the stage (at a public meeting), even a five-year-old child says that a 'Ghoshana Machine' (a machine of announcements) has come. No work on ground only announcements, he said.

He said that the teachers in Madhya Pradesh in schools are hired on contract, which gives no security to their future.

Alleging rampant corruption in Madhya Pradesh, the Congress president said Mr Chouhan must answer about the Vyapam scam and the e-tendering scam.

He also promised to implement the Land Acquisition Act with rates four times more than the market costs.

Earlier in the day, a member of erstwhile royal family of Rewa Pushparaj Singh joined the Congress in the presence of Mr Gandhi and other leaders.

He was a minister during the Congress regime in the state but had joined the Samajwadi Party (SP) in 2008.

Mr Gandhi reached Chitrakoot (Satna district) from Allahabad by a helicopter on Thursday and visited the Kamta Nath temple where he performed 'puja'.

The temple is located in the forested hills of Kamadgiri where, according to mythology, Lord Rama stayed during his exile.

Later on Thursday, he addressed two public meetings respectively at Chitrakoot and Satna besides holding a roadshow in Rewa city in the night.

After addressing the rally at Chunari, the Congress president left for Allahabad in a helicopter.