Rahul Gandhi was elected to parliament from Wayanad in Kerala in national elections last month.

Congress president Rahul Gandhi, elected to parliament for the fourth time, took oath as a member of the 17th Lok Sabha on Monday. Mr Gandhi, however, forgot to sign the parliament register and got to it only after being reminded by officials and several lawmakers including Defence Minister Rajnath Singh.

Mr Gandhi was elected to parliament from Wayanad in Kerala last month. He had also contested from his family stronghold of Amethi in Uttar Pradesh but was defeated by BJP leader and Union Minister Smriti Irani by a margin of over 55,000 votes.

The loss had accentuated the abysmal performance of the Congress, which increased its tally marginally.

Rahul Gandhi took the oath in English this afternoon and began walking away towards his seat when he was reminded of the necessary signature. He then signed the register and walked back to applause from his party members including mother Sonia Gandhi. 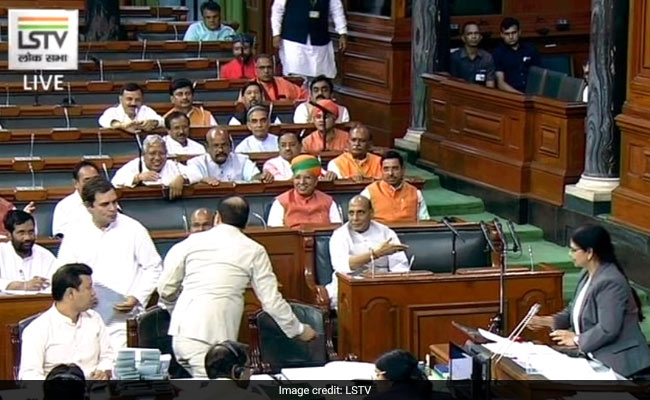 Minutes before taking oath, he tweeted that his fourth consecutive term as a member of the Lok Sabha begins Monday.

My 4th consecutive term as a Member of the #LokSabha begins today. Representing Wayanad, Kerala, I begin my new innings in Parliament by taking my oath this afternoon, affirming that I will bear true faith and allegiance to the Constitution of India ????????

Earlier in the day, as Prime Minister Narendra Modi took oath amid loud cheers and chants of "Modi, Modi", Ramdas Athawale, the lawmaker from the Republican Party of India, stood up and asked where Rahul Gandhi was. A reply came from the opposition benches: "He is here and will come".

The Congress is yet to announce its leaders in either House of Parliament. The party is hoping that Rahul Gandhi will take charge in the Lok Sabha.

Smiriti Irani, who won Amethi on her second attempt, also took oath today. The longest applause was reserved for her.