Rahul Gandhi kicked off his roadshow by performing an "aarti" amid chants of "Jai Narmade" by party functionaries. 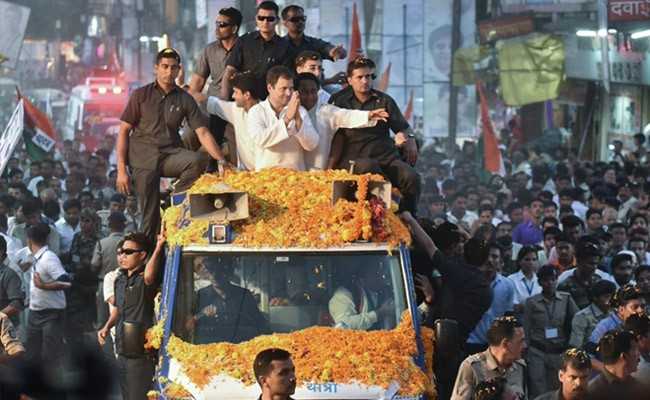 Congress president Rahul Gandhi on Saturday started his 8-kilometre road show in Madhya Pradesh's Jabalpur after paying obeisance to the Narmada River, with hundreds of posters dotting the route terming him a "Narmada bhakt".

The Narmada River is revered by the people of Madhya Pradesh and thousands of them carry out its "parikrama" (circumambulation) as a holy ritual. Senior Congress leader

Rahul Gandhi kicked off his roadshow by performing an "aarti" amid chants of "Jai Narmade" by party functionaries.

Rahul Gandhi' roadshow covered three assembly constituencies-Jabalpur West, Jabalpur North Central and Jabalpur East (SC) seats. While two of these seats are held by the BJP, the third has a Congress MLA.

During his campaign in the state, Rahul Gandhi was dubbed as "Shiv bhakt", following his return from the Kailash Mansarovar pilgrimage, and "Ram bhakt" after visiting Satna and Rewa districts of the state.

Pursuing what observers believe is a "soft" form of Hindutva, the Congress last month announced that it would build gaushalas in every district of the state if it attained power.

Madhya Pradesh goes to polls on November. The counting of votes will take place on December 11.