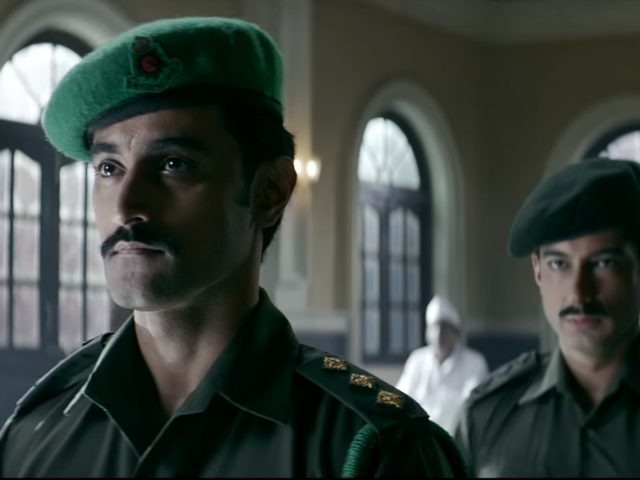 Raag Desh: Kunal Kapoor and Mohit Marwah in a still from the film

Raag Desh talks about the contribution of Indian National Army, which was set up by Netaji Subhash Chandra Bose, in India's independence.

Indian National Army was declared to be the army of Subhash Chandra Bose's Arzi Hukumat-e-Azad Hind (the Provisional Government of Free India). Under his leadership, the Indian National Army drew ex-prisoners and thousands of civilian volunteers from the Indian refugee population in Malaya (present-day Malaysia) and Burma. They also fought along with the Imperial Japanese Army against the British and Commonwealth forces in the campaigns in Burma, Imphal and Kohima.


The first teaser of Raag Desh was unveiled by the makers of the film on June 23.

A film we ve put our heart and soul into! Were they heroes or traitors? #Repost @raagdeshthefilm (@get_repost) If the army loses in war, can the nation still win? The fascinating story of the famous Red Fort Trials of INA. Watch the #RaagDeshTeaser! @kunalkkapoor @mohitmarwah @theamitsadh @tishu.d @itsvijayvarma #RajyaSabhaTV

Speaking to news agency IANS, filmmaker Tigmanshu Dhulia said that he was 'fascinated to know that India did not get freedom by dialogue and negotiation.'

"Being a student of history, it was fascinating for me to know that we did not get our freedom by dialogue and negotiation that we have been reading for so long. It's not," IANS quoted Tigmanshu Dhulia as saying.

The filmmaker added that his film 'doesn't deal with the mysterious death of Subhas Chandra Bose.'

"We all know that the winner writes the history. In this film, I explored the contribution of the INA in our freedom movement. But no, to kill everyone's interest, Raag Desh does not deal with Bose's mysterious death," Tigmanshu Dhulia told IANS.

Promoted
Listen to the latest songs, only on JioSaavn.com
Raag Desh is presented by Rajya Sabha TV and produced by Gurdeep Singh Sappal. The film is scheduled to release in theatres on July 28.