QUAD Summit 2022: These meetings with Yoshihide Suga, Shinzo Abe, and Yoshiro Mori illustrate the huge goodwill and personal chemistry of PM Modi with the Japanese PMs. 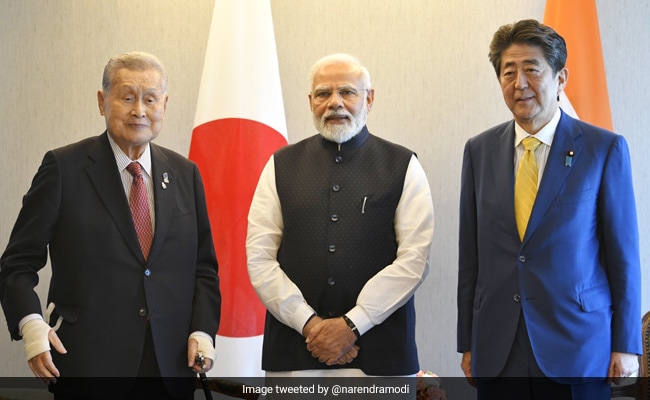 These meetings with Yoshihide Suga, Shinzo Abe, and Yoshiro Mori illustrate the huge goodwill and personal chemistry of PM Modi with the Japanese PMs.

Yoshiro Mori is the current Chairperson of the Japan-India Association (JIA) while Shinzo Abe will be taking over this role shortly.

The JIA, established in 1903, is one of the oldest friendship associations in Japan. PM Modi appreciated the significant contributions made by JIA under the leadership of Mr Mori in promoting exchanges between India and Japan in political, economic and cultural fields.

He also conveyed his best wishes to Shinzo Abe on his new responsibilities and looked forward to the JIA continuing its important role.

The leaders also discussed the broad canvas of the India-Japan Special Strategic and Global Partnership as well as the shared vision of India and Japan for a peaceful, stable and prosperous Indo-Pacific. Discussions were also held on ways to further promote cultural and people-to-people ties.

During his meeting with Yoshihide Suga, PM Modi thanked him for strengthening bilateral relations between the two countries.

They recalled their previous interactions, including their bilateral meeting on the sidelines of the first in-person Quad Leaders' Summit in Washington DC in September 2021.

Earlier today, PM Modi participated in the second in-person Quad Leaders' Summit in Tokyo, along with leaders of other Japan, the US and Australia.

During the summit, leaders reiterated their shared commitment to a free, open and inclusive Indo-Pacific and the importance of upholding the principles of sovereignty, territorial integrity and peaceful resolution of disputes.