The opposition parties have been protesting the three farm sector laws, alleging these are "anti-farmer measures" and will "destroy" the agriculture sector. 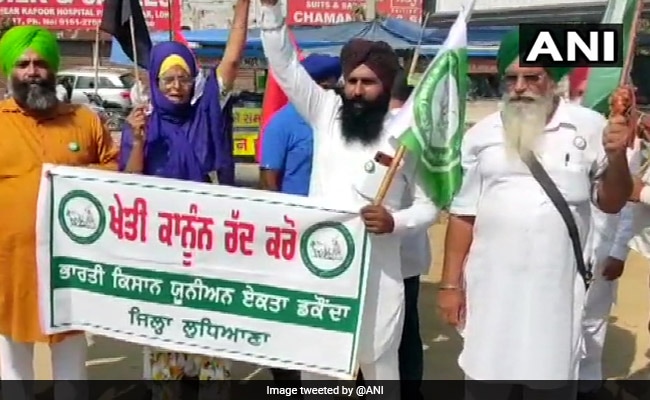 Protests were held at many places, including in Phagwara, Muktsar, Amritsar, Patiala and Bathinda.

Farmers under banners of different organisations held protests across Punjab and burnt effigies of Prime Minister Narendra Modi as they accused the BJP-led government at the Centre of maintaining a "stubborn attitude" towards the agitators' demand of revoking the newly enacted farm laws.

The opposition parties have been protesting the three farm sector laws, alleging these are "anti-farmer measures" and will "destroy" the agriculture sector.

The government has, however, asserted the new laws will free farmers from the clutches of middleman and allow them to sell their produce anywhere they want at a remunerative price.

On Saturday, protests were held at many places, including in Phagwara, Muktsar, Amritsar, Patiala and Bathinda which led to a disruption of vehicular traffic.

Farmers assembled at Phagwara-Hoshiarpur road and held a march. They then burnt the effigy of prime minister alleging that their leaders were "disrespected" during a meeting with Agriculture ministry officials in Delhi.

Representatives of several farmers' bodies had on Wednesday walked out of a meeting held in Delhi to discuss the farm laws with the Union agriculture secretary after finding no Union minister present at the meeting.

Addressing the protesters in Phagwara, BKU (Doaba) General Secretary Satnam Singh Sahni said, "We have been agitating against these farm laws for the last three months. But the Centre has turned a deaf ear to our demands."

Refuting reports about fissure among agitating farmer bodies, he asserted that they were all united in their fight against the "anti-farmer" laws.

Another farmer leader Manjit Singh Rai said, "If PM Modi shows sincerity in the matter and himself intervenes and invites the agitating farmers, we will go for such parleys."

In Ludhiana, a group of agitating farmers demonstrated outside a hotel at Ferozepur road when a meeting of the Punjab BJP led by its state unit chief Ashwani Sharma was in progress. The protesters raised slogans against the Centre and demanded the withdrawal of three farm reform laws.

Over the past several days, farmers have been blocking rail tracks, laid siege to toll plazas, fuel pumps, shopping malls and staged sit-ins outside the residences of several BJP leaders in the state.

Rail traffic has been disrupted and in turn, coal supply for thermal power plants have been impacted by the farmers'' agitation.

The farmers have been demanding that the three farm laws passed by Parliament recently be repealed. They have expressed apprehension that the new laws will pave a way for the dismantling of the minimum support price system, leaving them at the "mercy" of big corporates.