"Entire Nation Speaks In One Voice": All-Party Resolution On Pulwama

All political parties had condemned the Pulwama terror attack on Thursday, expressing condolences for the family of those killed.

Putting up a strong bipartisan front, political parties in the opposition and the government said India was determined to fight terrorism in a resolution adopted at the end of an all-party meeting this morning to discuss the Pulwama terror attack that left 40 security personnel dead.

Underscoring their solidarity with security forces for defending the country's unity and integrity, the parties, including the BJP and the Congress, passed a resolution condemning the terror attack and support being given to it from across the border.

The resolution did not name Pakistan but asserted that India has been facing the menace of the cross-border terrorism which of late, it added, is being actively encouraged by forces from the neighbouring country.

"India has displayed both firmness and resilience in dealing with these challenges. The entire nation speaks in one voice to express its determination to fight these challenges. Today, we stand united in solidarity with our security forces in fighting terrorism and in defending the unity and integrity of India," it said. 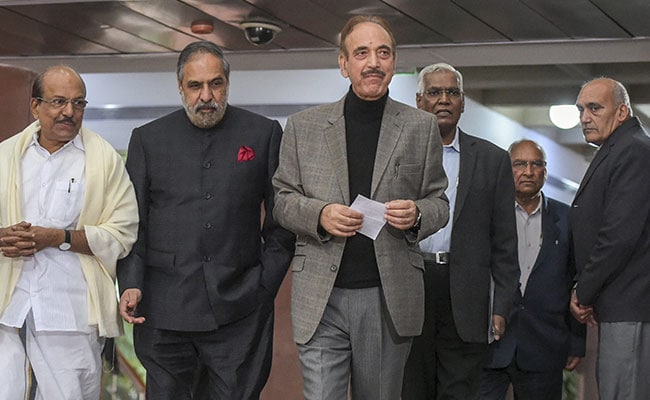 Congress leaders at the all-party meeting in parliament.

The meeting called by Home Minister Rajnath Singh was attended by Ghulam Nabi Azad, Anand Sharma and Jyotiraditya Scindia of the Congress, Sudip Bandyopadhyay and Derek O' Brien of the Trinamool, Sanjay Raut of the Shiv Sena, D Raja of the Left, Farooq Abdullah of the National Conference, Ram Vilas Paswan of the Lok Janshakti Party among others.

The parties were briefed about the attack in Pulwama and the steps being taken by the government so far, a Home Ministry official said.

Rajnath Singh also spoke strongly about the violence that broke out in Jammu after the attack, saying that no communal attacks will be tolerated, sources said.

Before the meeting began, Union Home Secretary Rajiv Gauba went to the residence of the Home Minister to have a one-to-one meeting.

Rajnath Singh visited Jammu and Kashmir yesterday where he held meetings with security officers and also carried the coffin of a soldier killed in the attack.

All political parties had condemned the attack on Thursday, expressing condolences for the family of those killed and supporting the security forces.

Prime Minister Narendra Modi has warned Pakistan to expect a strong response to the suicide attack as the government said it had "incontrovertible evidence" of the country's involvement, a statement rejected by Islamabad.

The car bomb attack, claimed by the Pakistan-based Jaish-e-Mohammed, on a security convoy on was the worst strike on forces Jammu and Kashmir in decades.