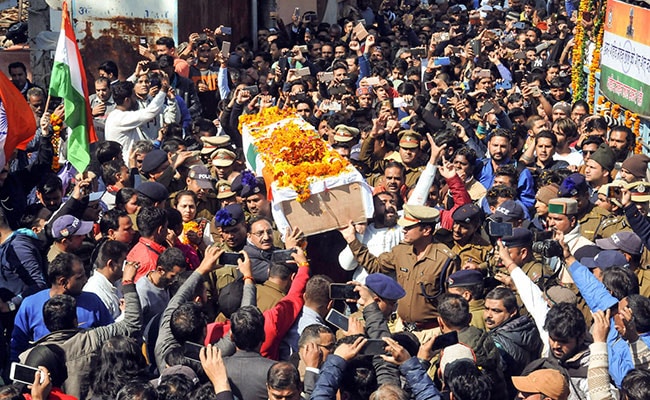 Bodies of the CRPF soldiers reached their homes where hundreds gathered. (PTI)

The bodies of the soldiers killed in an attack by Pakistan-based terror group Jaish-e-Mohammed in Jammu and Kashmir's Pulwama on Thursday reach their homes today. As the CRPF soldiers' coffins arrived, hundreds gathered to pay their respect in an emotional moment. People stood on roads with flowers, holding the national flag to receive the soldiers' bodies.

Last evening, Prime Minister Narendra Modi, Union ministers Rajnath Singh and Nirmala Sitharaman, along with Congress president Rahul Gandhi and Delhi Chief Minister Arvind Kejriwal paid tributes to the 40 Central Reserve Police Force (CRPF) soldiers as their bodies arrived at the Palam airport. PM Modi and the other leaders laid the wreath on the coffins, wrapped in the national flag.

A terrorist drove up a car carrying 60 kg of RDX explosives next to a security convoy on the Jammu-Srinagar highway and triggered the explosives on Thursday in what is the worst terror attack to take place in Kashmir since the start of the century. US National Security Adviser John Bolton has told Indian counterpart Ajit Doval yesterday that America supports India's right to self-defence after they discussed the Pulwama attack. "I told Ajit Doval today that we support India's right to self-defence. I have spoken to him twice, including this morning... and expressed US' condolences over the terrorist attack," he told news agency PTI. The centre has decided to take all possible diplomatic steps to ensure Pakistan's isolation and had withdrawn "Most Favoured Nation" status to the country.

Here are the highlights on the story:

Paying tribute to our martyred soldiers at the sets of Marakkar#PulwamaTerroristAttackpic.twitter.com/eGqRHd5gZq

Feb 16, 2019 23:30 (IST)
Over 40 countries and at least three multi-nation organisations condemned the Pulwama attack in which 40 CRPF personnel were killed, and expressed their condolences.
The UN, the Shanghai Cooperation Organisation and the European Union issued statements condemning the terror attack, reported Press Trust of India.
Countries such as the US, France, Canada, Israel, Turkey, Saudi Arabia, Germany, and Australia were among the countries that expressed solidarity with India.
India's neighbours such as Sri Lanka, Bhutan, Nepal, Maldives, Mauritius, Bangladesh and Afghanistan also condemned the attack, said PTI.
Feb 16, 2019 22:49 (IST)

Pulwama Attack: Top Spy Chiefs Meet At Rajnath Singh's Home As India Preps Dossier For Pakistan
The country's top intelligence officers along with Home Minister Rajnath Singh held a closed-door meeting in Delhi today to prepare a dossier on Pakistan's involvement in the car bomb attack that killed over 40 CRPF soldiers in Jammu and Kashmir's Pulwama on Thursday, people with direct knowledge of the matter told NDTV.
Feb 16, 2019 22:31 (IST)
An Ahmedabad-based Gujarati family said they will donate Rs 1 lakh to the families of each of the CRPF soldiers who were killed in the terror attack in the Pulwama district of Jammu and Kashmir's on Thursday.
Gujarat's Deputy Chief Minister Nitin Patel said, "Babubhai Patel, a friend of mine, and his family have decided to donate Rs 1 lakh each to the family of all the CRPF troopers killed in the tragic incident in Pulwama. This is a wonderful gesture by the family. We hope more such donors will come forward and lend their support to the victims' families and show their solidarity towards the nation," according to IANS.
Feb 16, 2019 21:04 (IST)
Thousands across the country paid their respects to those killed in the Thursday's Pulwama terror attack.

The State Bank of India @TheOfficialSBI has created a UPI for #BharatKeVeer initiative. You can now help the families of India's bravehearts by contributing through UPI using VPA- bharatkeveer@sbi pic.twitter.com/HoXfODhoYK

Feb 16, 2019 20:55 (IST)
Home Minister Rajnath Singh today announced "The Bharat Ke Verer", a trust into which public can contribute voluntarily to support the families of those Central Armed Paramilitary Forces who were killed in the Pulwama terror attack.

During the last few days there has been a tremendous response from people wanting to contribute through the website : https://t.co/wkuXoWnRJL
MHA is grateful for this support.

However Due to heavy traffic, sometimes a slow down is reported in accessing the website.

"The @BharatKeVeer fund is managed by a committee comprising of Director Generals of CAPFs under aegeis of the Ministry of Home Affairs," Rajnath Singh tweeted.
Feb 16, 2019 20:09 (IST)

Jammu and Kashmir Governor Satya Pal Malik convened a high level meeting at the Raj Bhavan today and reviewed the present law and order situation in the state in the aftermath of #PulwamaAttack . pic.twitter.com/NQyT0DwZl0 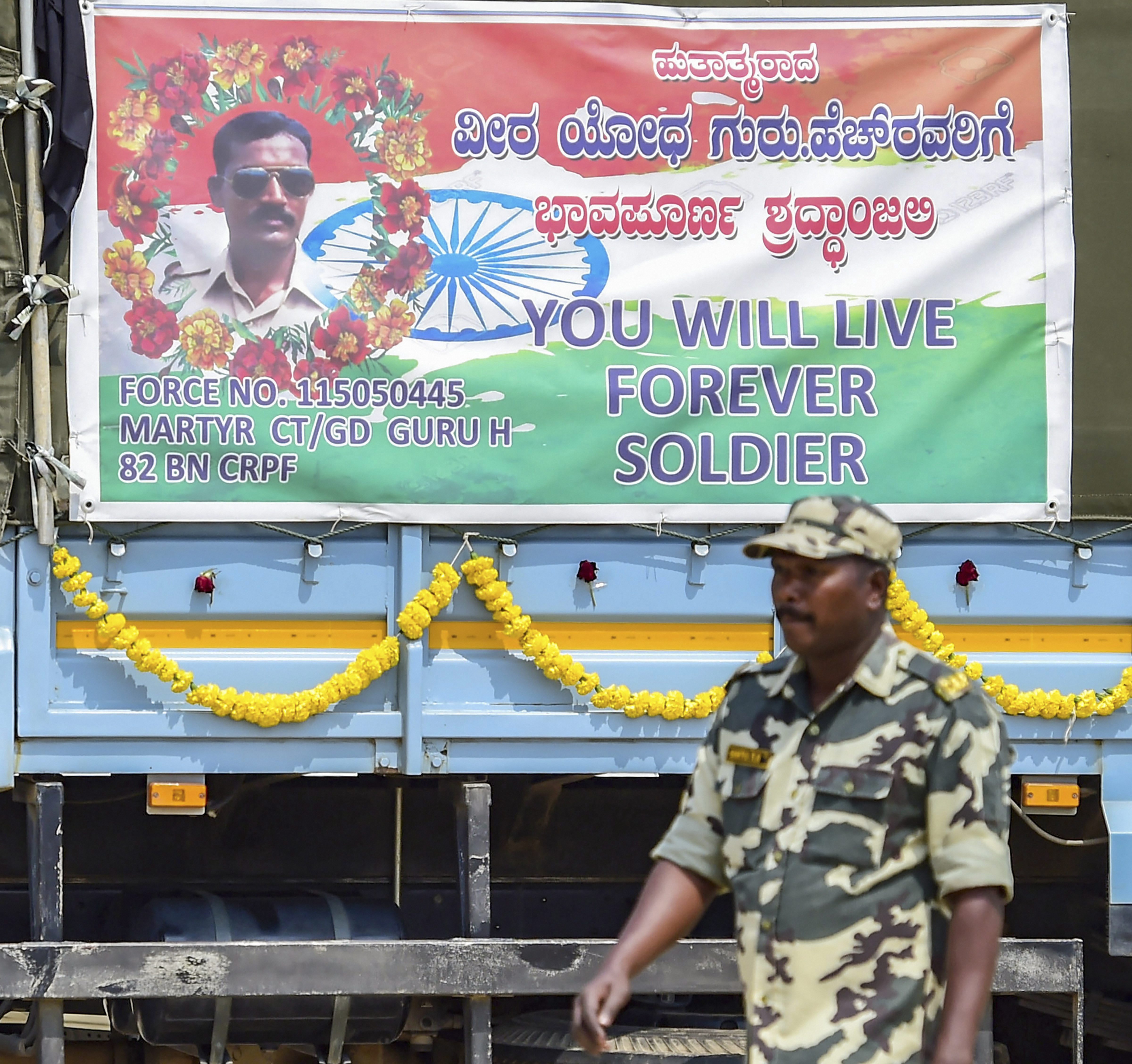 Feb 16, 2019 18:25 (IST)
Tamil Nadu Chief Minister K Palaniswami on Saturday announced government jobs to one person each from the families of two CRPF personnel from the state, who were killed in the Pulwama terror attack in Jammu and Kashmir, reports Press Trust of India.
Defence Minister Nirmala Sitharaman visited the family of the army personnel killed in the Pulwama attack.

Paid tributes to two brave #CRPF jawans from #Odisha who sacrificed their lives in #PulwamaTerroristAttack. Entire State stands in solidarity with the bereaved families. A school in their villages will be named after the martyrs in honour of their supreme sacrifice. pic.twitter.com/OPSMc1cDv1 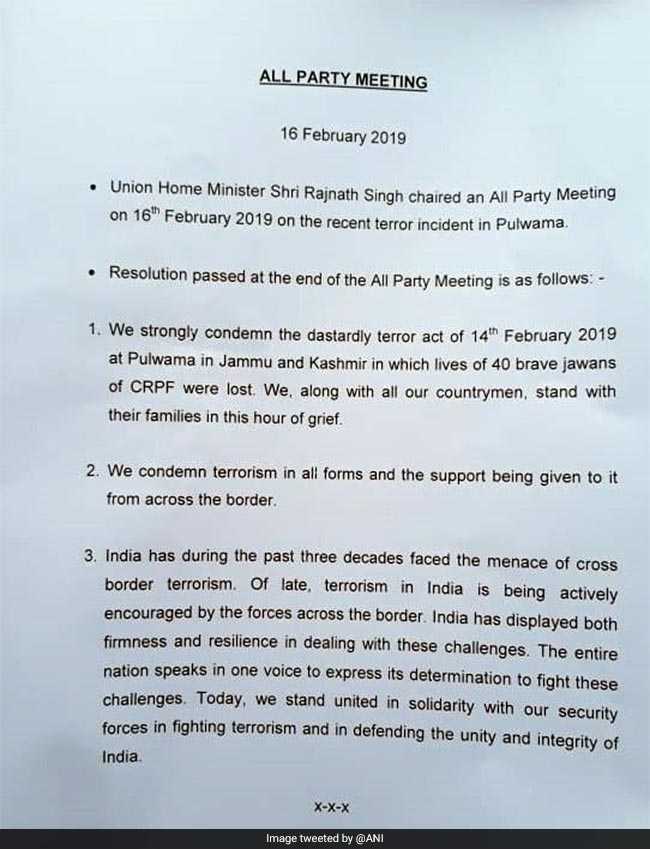 Feb 16, 2019 13:00 (IST)
CRPF Director General RR Bhatnagar is at the spot of the Pulwama attack. "I have come to see the spot. As you have seen, forensic and NIA teams are already working here and the investigation is going on," he said, adding that more details will be given once the investigation is completed
Feb 16, 2019 12:58 (IST)
Rajnath Singh reportedly said in the all-party meeting that even if the BJP is responsible for acts of violence, they will be held responsible. He also reportedly requested his party in the state to not communalise the situation.
Feb 16, 2019 12:54 (IST)
West Bengal Chief Minister Mamata Banerjee has announced a gathering at 4 pm in the evening in Kolkata. The gathering will meet at Hazra More and will then proceed on a candlelight march.
"We express our solidarity with our jawans, countrymen and united India. At this hour, we are all together," she tweeted
Feb 16, 2019 12:48 (IST)
All-party meet ends in Parliament
Feb 16, 2019 12:41 (IST)
Tamil Nadu Chief Minister E Palaniswami has announced government jobs to one family member each of the two CRPF personnel from the state who lost their lives in the Pulwama terror attack, reports news agency ANI
Feb 16, 2019 12:40 (IST) 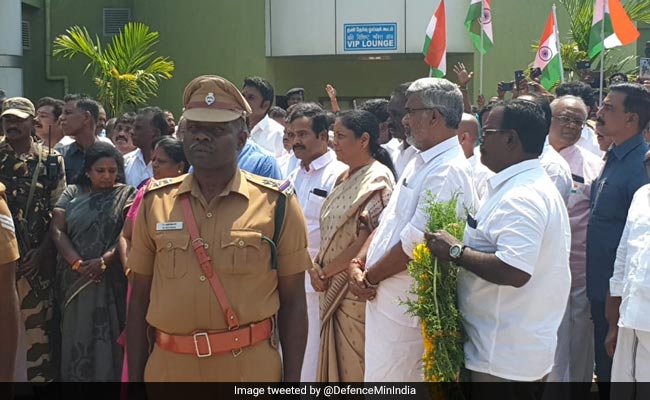 India will ask the United Nations's top court on Monday to order Pakistan to take Indian national Kulbhushan Jadhav, accused of espionage, off death row. Mr Jadhav, who India says was kidnapped from Iran, has been sentenced to death by a Pakistani military court.
Read the full story here
Feb 16, 2019 12:19 (IST)

The US on Friday asked Pakistan to "freeze without delay" the funds and other financial assets of the UNSC-designated terrorist networks and their leaders.
"Pakistan outlawed Jaish-e-Mohammed in 2002. However, the group still operates in Pakistan. The US designated JeM as a foreign terrorist organization in December 2001, and we fully support actions to prevent them from conducting future attacks," the US State Department said in a statement.
Feb 16, 2019 12:15 (IST)
Trains have resumed service from Maharashtra's Nallasopara after three hours following protests against the Pulwama terror attack
Feb 16, 2019 11:40 (IST)
Jammu deputy commissioner Ramesh Kumar said, "The situation is under control since last evening. Earlier there were some peaceful protests but in the afternoon they turned violent and some vehicles were set on fire. Curfew will continue, people are requested not to come out of their homes. Educational institutions are closed. Don't believe in rumours and cooperate with the administration to restore normalcy."
Feb 16, 2019 11:20 (IST)
Haryana leader Abhay Chautala, who was to attend a family friend's wedding in Pakistan, has cancelled his visit
Feb 16, 2019 11:11 (IST)
All-party meeting on Pulwama attack begins in Parliament
Feb 16, 2019 11:08 (IST)
In Maharashtra, people are staging a protest on railway tracks at Nallasopara railway station against the Pulwama terrorist attack
Feb 16, 2019 11:03 (IST)
Leaders have arrived at the Parliament for an all-party meet called by the centre over the Pulwama attack
Feb 16, 2019 10:23 (IST) 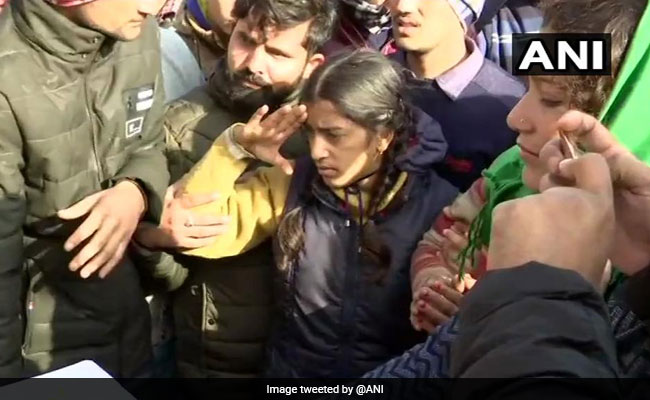 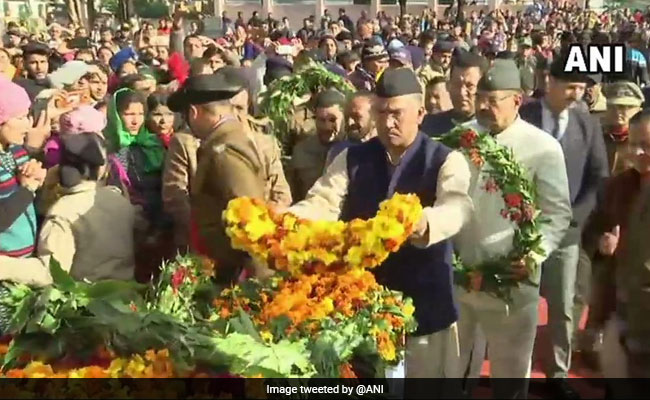 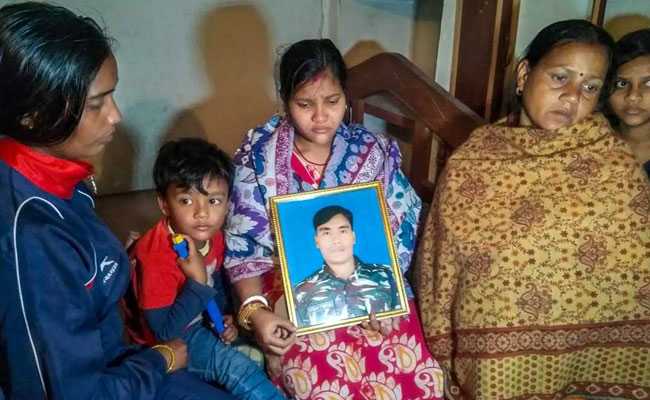 Hon'ble PM, Sir, the entire nation is in grief & you are the guardian of society / nation. We all stand firmly united with you in this hour of crisis. We pay our homages, prayers & deepest condolences to the brave soldiers & their families for their sacrifices through you.

Hon'ble PM, Sir, the entire nation is in grief & you are the guardian of society / nation. We all stand firmly united with you in this hour of crisis. We pay our homages, prayers & deepest condolences to the brave soldiers & their families for their sacrifices through you.

the whole situation. We need to give a befitting reply for the loss of all our beloved soldiers & await with bated breath for guidance & directions from you. Jai Hind!#PulwanaAttack#StandWithForces 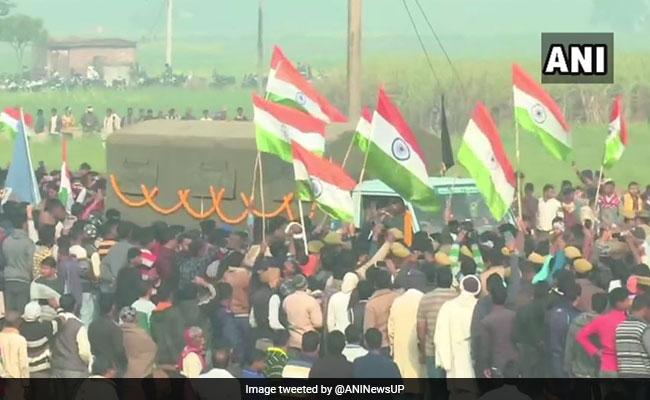 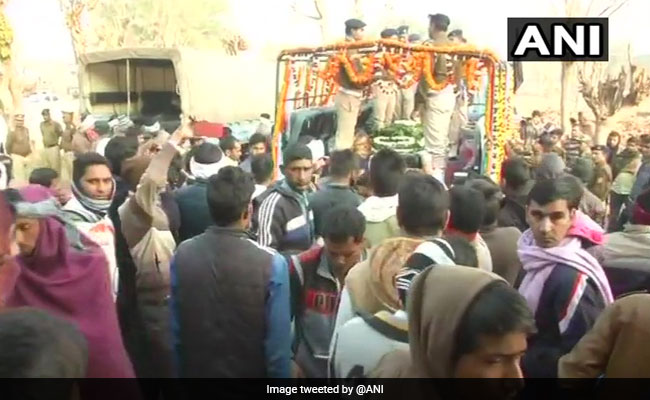 Feb 16, 2019 08:43 (IST)
In Uttar Pradesh's Unnao, people have gathered around the home of a CRPF soldier killed in Pulwama whose body reached an hour ago 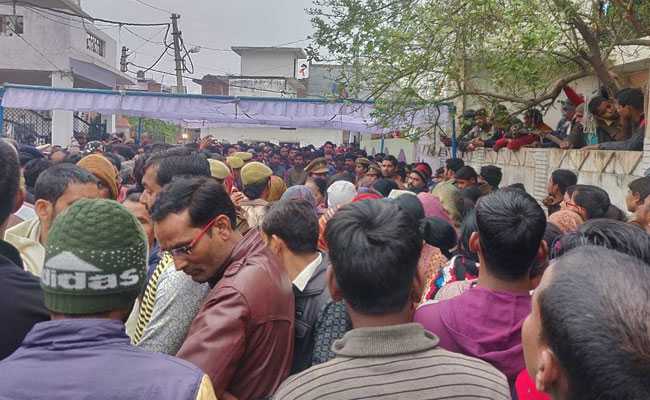 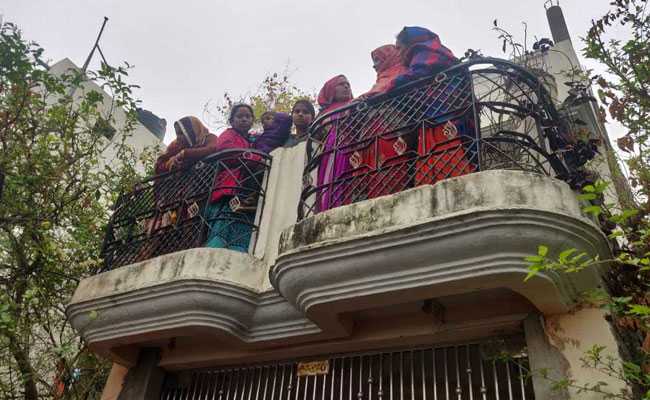 Feb 16, 2019 08:06 (IST)
As the bodies of the troops killed in the attack were charred due to the high-intensity impact of the RDX-triggered blast, it became very difficult to identify them. Most of the soldiers were either identified by their Aadhaar cards, force ID papers, PAN cards or leave applications kept in their pockets and bags, a senior official told news agency PTI yesterday.
Feb 16, 2019 08:00 (IST)
Cricketer-turned-politician Navjot Singh Sidhu has landed in a huge question over his comments over the Pulwama attack. After condemning the deadly attack, he questioned, without naming Pakistan, "Can an entire nation be blamed for a handful of people?"
Read the full story here
Feb 16, 2019 07:55 (IST)
Saudi Arabia's Crown Prince Mohammed bin Salman was scheduled to visit Pakistan today along with a business delegation but he has cut short his trip following the Pulwama attack. He will now arrive in Pakistan on Sunday