Late Congress leader Renuka Appadurai was the last woman minister from the UT during 1980-83 and handled the Education portfolio in the M D R Ramachandran (DMK)-led coalition ministry. 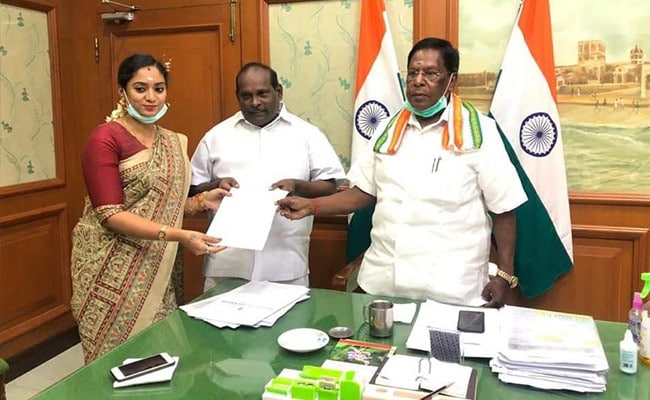 Chandira Priyanga will become the first woman minister in Puducherry in over four decades.

Puducherry would get its first woman minister in over four decades with the induction of AINRC legislator Chandira Priyanga in the N Rangasamy-led coalition cabinet, which will be expanded on June 27.

Presidential nod has been accorded to the list of cabinet members submitted by Chief Minister Rangasamy to Lt Governor Tamilisai Soundararajan on Tuesday.

According to a Puducherry Gazette notification, "the President has been pleased to appoint" A Namassivayam, K Lakshminarayanan, C Djeacoumar, Chandira Priyanga and A K Sai J Saravana Kumar as Ministers in the cabinet. Lakshminarayanan, Djeacoumar and Priyanga represent lead partner AINRC, while Namassivayam and Saravana Kumar are from its ally BJP.

Incidentally, this is the first time the saffron party is part of a Ministry in the Union Territory. Another first would be the induction of a woman member in the cabinet after 41 years, with Priyanga being chosen by Mr Rangasamy, who was sworn-in as chief minister on May 7.

Late Congress leader Renuka Appadurai was the last woman minister from the UT during 1980-83 and handled the Education portfolio in the M D R Ramachandran (DMK)-led coalition ministry. Ending more than a month's suspense, the cabinet formation in Puducherry finally took shape on Wednesday with Mr Rangasamy submitting the list of members to be included in his ministry, to Mr Soundararajan, which has now been approved by the President.

Mr Soundararajan will administer the oath of office and secrecy to each of the four AINRC members and two BJP MLAs. Though the AINRC-led NDA had swept the April 6 Assembly polls in this union territory,cabinet formation dragged on for long as the saffron party initially insisted for a deputy CM post, but later settled for the post of the Assembly Speaker.

Soon after leading his alliance to a win, AINRC founder Mr Rangasamy was sworn-in as chief minister on May 7 while BJP's ''Embalam'' R Selvam was elected unopposed as Speaker of the Puducherry Assembly on June 16.

The total strength of the Ministry would now be six, including the Chief Minister. In the hustings, AINRC emerged victorious from 10 segments out of 16 seats it contested and is heading the NDA here. The BJP annexed six seats out of 9 seats it aspired to garner. The NDA enjoys the support of three nominated members belonging to the BJP. The House has a total of 33 MLAs, including the three nominated ones.