BJP To Get 2 Berths, NR Congress 3 As Puducherry Finally Gets A Cabinet 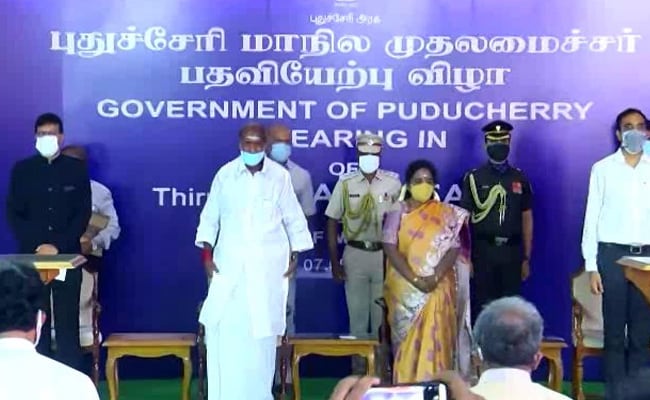 Puducherry Chief Minister N Rangasamy was sworn in May 7 (File)

The BJP will get two berths in the Puducherry cabinet led by its majority ally the NR Congress, which will get three, it was announced on Friday evening. The news ends an extended - 48 days - period of suspense over the make-up of Chief Minister N Rangasamy's ministerial team.

The NR Congress-BJP alliance won the April election and Mr Rangasamy took his oath on May 7.

K Lakshminaryanan, C Djeacoumar and Chandira Priyanga of the NR Congress and Namassivayayam - who quit the Congress before the polls - Sai J Saranvan Kumar of the BJP will take oaths at Raj Nivas, the Governor's residence, at 2.30 pm on Sunday.

The induction of Chandira Priyanga will mean Puducherry will have its first woman minister in 41 years, according to news agency PTI. This will also be the first time the BJP has a minister in the Union Territory. However, there are no members from minority communities in the cabinet.

The BJP has been given the post of Puducherry Speaker; R Selvam has already been appointed.

Cabinet formation in Puducherry had dragged on since election results were declared May 2, with the BJP initially insisting on the Deputy Chief Minister post. The party finally settled for the Speaker's post.

The total strength of the ministry will be six - four from the NR Congress (including the Chief Minister) and two from the BJP.

The NR Congress and BJP won a majority in the April election, winning 10 and six seats, respectively, in the 33-member Assembly. They also have the support of three nominated members.

The DMK, which allied with the Congress to sweep to power in Tamil Nadu, also won six seats.

The remaining six seats were claimed by independent candidates.