The centre has assured Sarbananda Sonowal to set up a committee to look into speedy implementation of several clauses of Assam Accord of 1985. 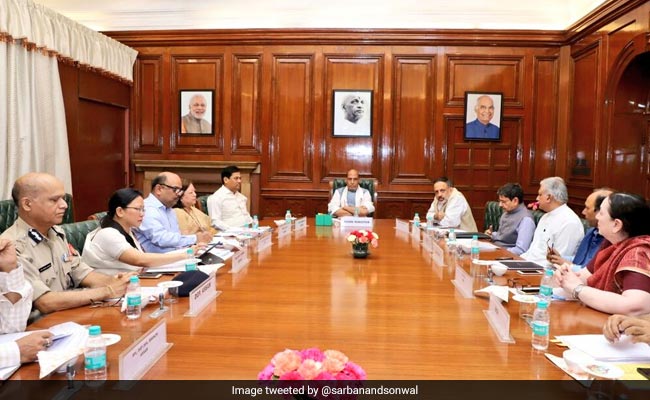 Guwahati, Assam: Home Minister Rajnath Singh today assured Assam Chief Minister Sarbananda Sonowal that the centre would not take any steps on the Citizenship (Amendment) Bill 2016, which has been vehemently opposed in Assam, without talking to the people of the state. This assurance from the centre comes at a time when the Sarbananda Sonowal-led government is facing its first major crisis after coming to power two years ago through a landmark victory.

Mr Sonowal met Mr Singh for two hours in Delhi today, where it was also decided that the centre would send additional forces for the release of the final draft of the National Register of Citizens or NRC that will be released at the end of June.

The centre has further assured Mr Sonowal to set up a committee to look into speedy implementation of several clauses of Assam Accord of 1985.

A concerned Mr Sonowal is seeking the centre's help as protests against the bill are growing louder in Assam.

Assam has been witnessing protests against the central government's move to enact the Citizenship (Amendment) Bill 2016 that seeks to grant citizenship to members of the minority community from Bangladesh, Pakistan and Afghanistan who came to India due to religious persecution in those countries.

Organisations spearheading the protests said that the bill, if passed, pave the way for giving citizenship to illegal immigrants from Bangladesh in Assam.

"This bill contradicts various clauses of the Assam Accord and it will be a threat to the indigenous people. So, we are asking the centre not to pressurise on this", Assam former chief minister Prafulla Mahanta told NDTV.

Mr Sonowal was once described in Assam as the Jatiya Nayak or the national hero since it was due to his petition at the Supreme Court that the controversial Illegal Migrants (Determination by Tribunal) or IMDT Act was scrapped. But within two years of coming to power, both Mr Sonowal and the BJP are facing sharp criticism for the push the BJP is trying to give to the Citizenship Amendment Bill.

"He was called the leader of Assam but now he is not thinking about Assam. We cannot accommodate any foreigners, whether Hindus or Muslims", Deepak Das, a protester, told NDTV in Guwahati.

From the numbers perspective, the Assam government is safe. In the 126 member assembly, Mr Sonowal has the support of 87, the opposition only has 38, but anger is brewing.

Even pro-talk ULFA group have threatened to pull out of peace talks if the centre goes ahead with the Bill.

Promoted
Listen to the latest songs, only on JioSaavn.com
"In our last meeting with the centre's interlocutor, we have made it clear that if the government goes forward with the Bill it will impact the peace talks process", ULFA leader Anup Chetia told NDTV.

Any derailment of ULFA peace talks, which are in an advanced stage, will impact other peace initiatives in the Northeast, something that the centre might not risk ahead of 2019 general elections.
Comments
Sarbananda SonowalCitizenship Amendment Bill