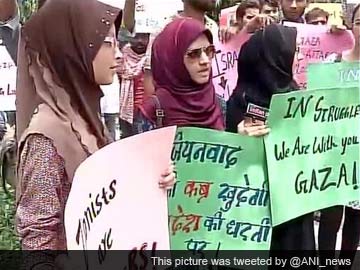 New Delhi: Scores of protesters, mostly students of Jawaharlal Nehru University (JNU) had gathered outside the Israeli Embassy in New Delhi on Sunday to protest against Israel's air strikes in the Gaza Strip resulting in civilian casualties.

"There were around 70-80 protesters mostly students from JNU. They reached the Israeli embassy at around 2 PM, staged a demonstration and dispersed on their own," said Additional Commissioner of Police BS Tyagi.

As per media reports, similar protests were also held in various other countries today to condemn the military offensive in Gaza.

As Israel's air campaign in the Gaza Strip entered its sixth day, the overall death toll rose to 165 with more than 1,000 injured and the UN Security Council called on both sides to declare a ceasefire.

Israel has also mounted a ground assault there.

Promoted
Listen to the latest songs, only on JioSaavn.com
Israel had began Operation Protective Edge before dawn on Tuesday in an attempt to halt cross-border rocket fire by militant groups.