On Sunday, Delhi Police had allowed the tractor rally after the annual Republic Day parade.

Thousands of farmers knocked down barricades at Delhi's borders, clashed with the police and entered the heart of the national capital on Republic Day as they took out a tractor rally against the government's new agricultural laws. Amid the chaos, protesters were tear-gassed and baton-charged. The disarray was caused after the protesters - allowed to hold the "Kisaan Parade" between 12 and 5 PM - began the march much before time and deviated from the agreed routes.

One farmer died near the central Delhi's ITO after his tractor overturned, said police. However, some protesters claimed he was killed in the police firing, they began a sit-in.

In a statement, farmers' body Samyukta Kisan Morcha said: "We thank farmers for the unprecedented participation in today's Farmers Republic Day Parade. We also condemn and regret the undesirable and unacceptable events that have taken place today and dissociate ourselves from those indulging in such acts."  Anti-social elements "had infiltrated the otherwise peaceful movement", they said.

As the country celebrated its 72nd Republic Day, farmers had been given the permission to take out their tractor rally in Delhi after the annual parade at Rajpath, a ceremonial boulevard. Crowds, however, swelled at the borders at around 8 AM even before the parade started. Some cops were injured while trying to stop the protesters.

Stunning visuals showed farmers breaching barriers at the Singhu border near Haryana, the epicentre of protests against the farm laws that began late November. More than 5,000 protesters had gathered on the outskirts. A dramatic video from Delhi's Akshardham showed policemen firing tear gas shells from an overbridge as protesters on road looked for cover. At Mukarba chowk, protesters reportedly hurled stones at cops. In Nangloi area, the Riot Control Police was on standby.

By afternoon, a large group had reached the iconic Red Fort. They were seen within the ramparts of the iconic Mughal-built monument, trying to put up their yellow flags at the spot where Prime Ministers hoist the national flag. Within an hour, as the crowd trickled, a farmer told NDTV: "We came here to deliver a message to the centre. Our job is done. We will go back now." A mild lathicharge took place to disperse the protesters.

Farmers' body Samyukta Kisan Morcha said it dissociates itself  "from all such elements that have violated our discipline". "We appeal strongly to everyone to stick to the route and norms of the Parade, and not indulge in any violent action or anything that taints national symbols and dignity. We appeal to everyone to desist from any such acts." 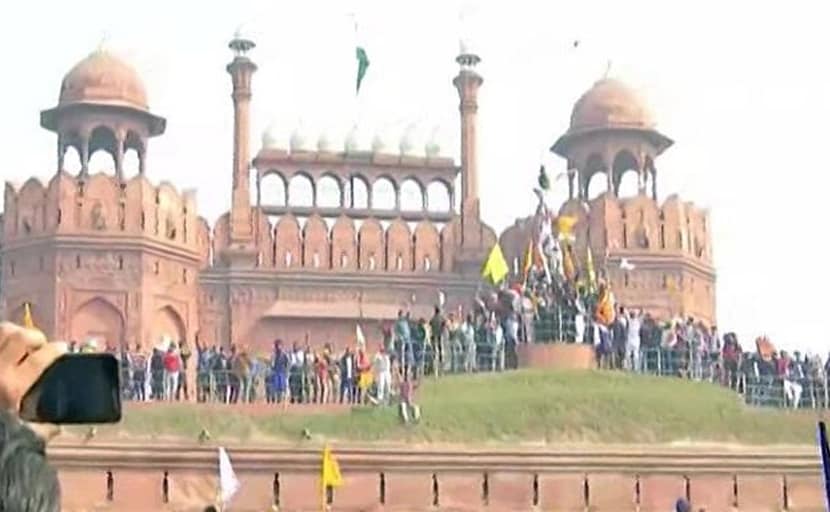 Protesters were seen within the ramparts of the Red Fort.

"Majority of those who breached the barricades at Nangloi and marched towards central Delhi have been pushed back. Few might have gone ahead. We are in touch with farmers' leaders. Let the rally stick to its designated route. Today is national festival, Republic Day. Nothing should be done which disrespects that," police officer Shalini Singh said.

On Sunday, Delhi Police had allowed the tractor rally after the annual Republic Day parade. The protesters were told they can't disrupt the celebrations at Rajpath even as the farmers insisted their parade will be "peaceful". However, the cops had also sounded a warning. "Mischievous elements can create a law-and-order situation," Deependra Pathak, Special Commissioner of Police (Intelligence), said at a news conference. 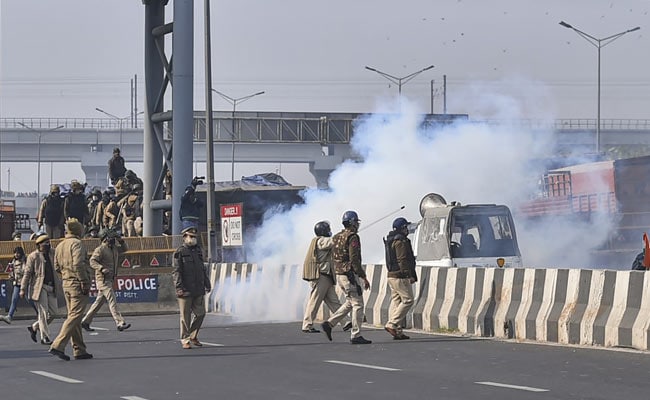 "Over 300 Twitter handles have been generated from Pakistan during January 13 to 18 to disrupt the tractor rally by farmers only by misleading people. There are inputs about the same from different agencies too. It will be a challenging task for us, but the rally will be conducted amid tight security after the Republic Day parade is over," he added.

Three routes were cleared for the farmers to hold the parade - 63-km route near Singhu Border, 62.5 km-long route from Tikri border, a 68-km long route from Ghazipur border that divides Uttar Pradesh and Delhi. On Monday, one of the key participants - the Kisan Mazdoor Sangharsh Committee - declared that it would not stick to the route agreed upon by the Samyukt Kisan Morcha and the police.

Earlier, the centre had opposed the tractor rally on Republic Day in an affidavit in the Supreme Court, stressing it will be "an embarrassment to the nation".