"If I'm at home, ok. If I go to my office, ok. But the moment I go elsewhere, then they start this tamasha. Why? This is becoming ridiculous," Priyanka Gandhi said before her detention

Congress leader Priyanka Gandhi Vadra on Wednesday met the family of a man who died while in the custody of Uttar Pradesh Police in Agra and promised them all help in their fight for justice.

She said that Arun Valmiki's relatives told her that the entire family was tortured. She said they told her that Valmiki was given electric shocks and his hands were crushed under chair by the police. Besides, around 40 members of the Valmiki community were also arrested and tortured, she claimed.

Ms Gandhi Vadra had been allowed to proceed along with four others after being detained by the cops earlier - for a second time in less than a month.

Her car had been stopped at the first toll plaza on the Lucknow-Agra Expressway.

"If I'm at home, ok. If I go to my office, ok. But the moment I go elsewhere, then they start this tamasha. Why? Eventually I will meet the family. This is becoming ridiculous... people are being affected. Look at the traffic (behind her stopped convoy)," she said shortly before she was taken into detention.

Ms Gandhi Vadra also underlined her constitutional right to free movement in the country, and made it clear she is determined - as soon as she is released - to visit the man's family.

Earlier she tweeted asking "what is the UP government so afraid of?"

"Arun Valmiki died in police custody. His family is seeking justice. I want to visit that family. What is the UP government afraid of? Why am I being stopped? Today is Lord Valmiki Jayanti... PM Modi spoke big on Buddha but this is attacking his message," she wrote in Hindi.

UP Police told Ms Gandhi Vadra she had been stopped per an order issued by the Agra District Magistrate, which cited potential law and order issues to stop political leaders from visiting the city.

Chaotic visuals from the scene showed Ms Gandhi Vadra surrounded by a sea of people, including policemen, as she tried to make her way past the blockade. Another visual showed a burly UP cop standing in front of her vehicle, with both hands placed firmly on the hood. 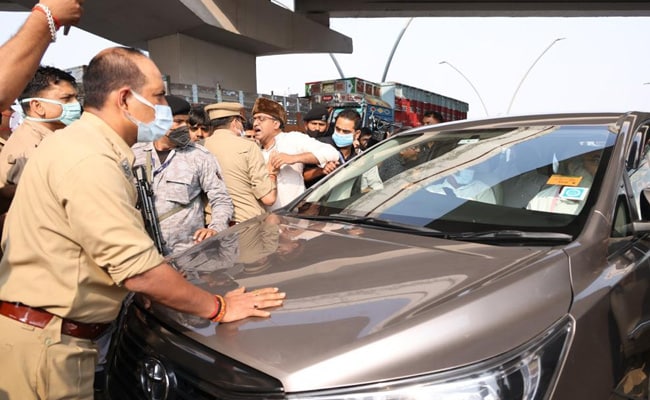 In a video of the conversation between the Congress leader and the police, she can be heard asking: "Wherever I go... I have to ask for permission?", to which the officer says it is a "law and order issue".

"What is the issue? Someone has died... what is the law and order..." she replies.

There were also some more pleasant visuals with Ms Gandhi Vadra posing for selfies with a few women police officers - all as party workers can be heard chanting and shouting in the background. 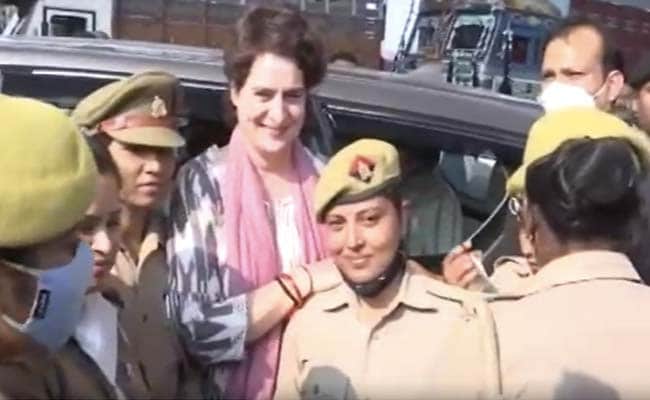 Senior Superintendent of Police (SSP) Agra Muniraj G said he fell sick Tuesday night while a raid was being carried out at his house. He was then taken to a hospital but doctors declared him dead, he said.

Arun was accused of stealing the money from a building that served as the police station's evidence warehouse, and where he worked as a cleaner.

A post-mortem was carried out on his body, which has now been handed over to the family.

Priyanka Gandhi Vadra was detained by UP cops earlier this month while on her way to visit the families of farmers killed in Lakhimpur. She had alleged she was being illegally held. UP police said the case against Ms Gandhi Vadra related to preventive detention due to apprehension of breach of peace.

Her brother, party MP Rahul Gandhi, was also stopped from visiting the families.

Eventually the UP government relented and allowed opposition parties, including Ms Gandhi Vadra and Mr Gandhi to visit the families.