"Not In Your Car": The Stand-Off And Drama After Rahul Gandhi Landed

Lakhimpur Kheri violence: Earlier today, the UP administration allowed Rahul Gandhi, Priyanka Gandhi Vadra (detained since Monday) and three others to visit Lakhimpur Kheri to meet the families of farmers run over. 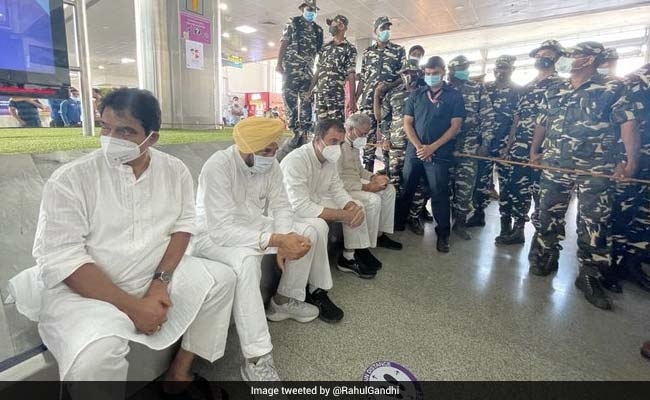 UP violence: After a brief confrontation, Rahul Gandhi was allowed to take his own car.

Rahul Gandhi refused to leave the Lucknow airport in a dramatic standoff this afternoon with security personnel when he was asked to get into a police car for his visit to Lakhimpur Kheri, where eight people, including four farmers, were killed on Sunday. After a brief confrontation, the Congress leader was allowed to take his own car.

"Who are you to arrange my transport? I want to leave in my car," the Congress leader told the Uttar Pradesh security men who ringed around him.

"They are up to some mischief. Cent per cent," he said to reporters.

As Rahul Gandhi, Punjab Chief Minister Charanjit Channi and Chhattisgarh Bhupesh Baghel stayed put in the airport, the police cordoned off the area with rope.

"Let me leave! They are not letting me leave the airport. See this - what kind of permission is this? See the state of the UP government's 'permission'. I want to leave the airport but they are not allowing me to leave. Yeh scene dikhao acchhi tarah (show this scene properly)," Rahul Gandhi said, turning to the media.

Earlier today, the UP administration allowed Rahul Gandhi, Priyanka Gandhi Vadra (detained since Monday) and three others to visit Lakhimpur Kheri to meet the families of farmers run over on Sunday during a protest against Union Minister Ajay Mishra's visit.

The Congress has demanded that Prime Minister Narendra Modi sack Mr Mishra, whose convoy drove into a crowd of protesters, crushing some of them. Farmers allege that the car that ran over protesters was being driven by the minister's son Ashish Mishra.

The UP government and police had so far blocked opposition politicians from travelling to Lakhimpur Kheri.

Priyanka Gandhi says she has been "illegally detained" by the state government.