The president, who is also the supreme commander of the armed forces, awarded the Colours at a grand ceremonial parade held at the Combat Army Aviation Training School at Nashik Road. 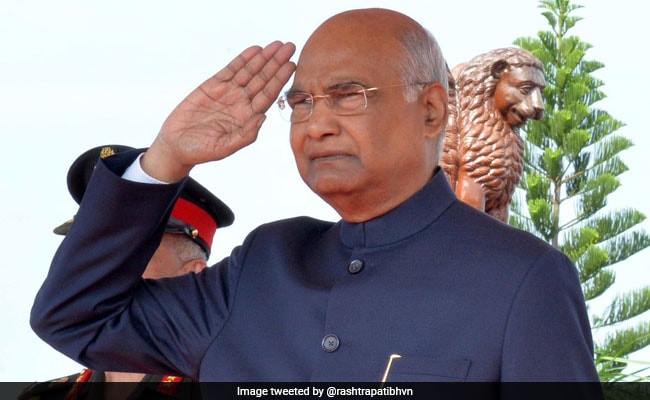 President Ram Nath Kovind on Thursday presented the prestigious President's Colours to the Army Aviation Corps at a ceremony in Nashik and lauded the wing for serving the nation with dedication.

The president, who is also the supreme commander of the armed forces, awarded the Colours at a grand ceremonial parade held at the Combat Army Aviation Training School at Nashik Road.

"The Indian Army and the nation are proud of you," he told the Corps members during his address on the occasion.

Presentation of the President's Colours is an acknowledgment of the meritorious service rendered by the Army Aviation Corps over the years.

The honour is a visible symbol of excellence and has been earned by the Army Aviation Corps through dedication and worthy contribution both during war and peace.

Mr Kovind lauded the Army Aviation Corps and for their immense contribution towards nation-building.

"It gives me immense pleasure to be present amid my sky soldiers. In my capacity as the Supreme Commander of the Armed Forces, I dedicate this visit to the armed forces of our country," he said.

The Corps is a successor of erstwhile Air Observation Post. Raised on November 1, 1986, the Corps has lived up to the motto of Swift and Sure and participated in various operations.

The Corps proved its combat credentials during Operation Pawan in Sri Lanka. The Siachen Glacier has been the ultimate operational frontier for the Corps since 1984.

Routinely operating at over 20,000 feet in challenging conditions, the highly skilled and motivated pilots of the Corps have carried out service in Operation Meghdoot.

Mr Kovind arrived in Nashik on Wednesday night as part of his visit to Maharashtra, Karnataka and Gujarat from October 9 to 13.

Later on Thursday, he will reach Karnataka to attend the birth centenary celebrations of Maharaja Sri Jayachamaraja Wadiyar of Mysore.

On Friday, he will lay the foundation stone for the campus of JSS Academy of Higher Education and Research at Varuna Village, Mysuru.