It has earmarked Rs 8,000 crore to provide free LPG connection to women from families living below the poverty line (BPL). 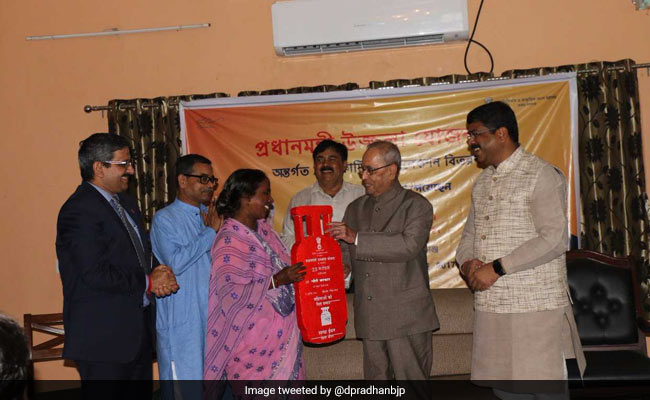 Jangipur: President Pranab Mukherjee today handed over cooking gas connection to a woman in Jangipur to mark meeting half the target of distributing five crore free LPG connections to women from poor households.

In May last year, the government embarked on a drive to provide free cooking gas connection to 5 crore women from poor households in three years with a view to reduce the use of polluting fuels such as wood and dried cow dung that, according to the World Health Organisation, causes 1.3 million premature deaths in India every year.

The indoor and near-home pollution generated by burning wood and cow dung is the leading cause of premature death in India after high blood pressure.

Mr Mukherjee handed over a cooking gas connection to Gauri Sarkaar at his residence, Jangipur House, which took the number of free connections provided under the Pradhan Mantri Ujjwala Yojana scheme so far to 2.5 crore.

In all, 10 women from the President's hometown Jangipur as well as Raghunath Ganj and Murshidabad were handed over free connections at a ceremony also attended by Oil Minister Dharmendra Pradhan.

The government is targeting increasing LPG usage to cover 80 per cent of the households by March 2019, against 72.8 per cent as on April 1.

It has earmarked Rs 8,000 crore to provide free LPG connection to women from families living below the poverty line (BPL).

"Have been lucky to have a team of dedicated officers who made #2.5CrUjjwala possible. Happy to share a frame with some of them at Jangipur," Mr Pradhan said in another tweet along with a picture of the president and the beneficiary.

"Double Delight Moments for these PMUY Beneficiaries at Jangipur. Getting  freedom from Smoke & Sharing frame with Hon'ble @RashtrapatiBhvn," he said in another tweet.