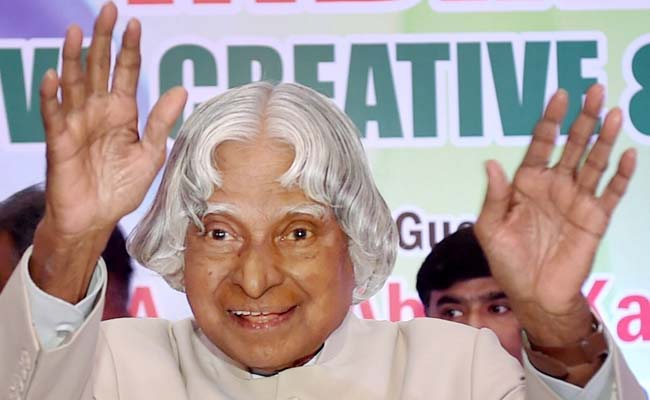 Kolkata: The lecture which President Kalam couldn't finish before collapsing while talking to students in IIM Shillong could soon be part of a new book.

'Creating a Livable Planet Earth' was not only the topic of a lecture which he had just begun to deliver before the management students on that fateful Monday evening, but was also the subject of a book which he could not finish in his lifetime.

"We were working hard to make it into a book. The idea had been there with him for a long time and he had even written almost half of it. Now we are planning to compile it into a book form with whatever he had written," Dr Kalam's close aide Srijan Pal Singh told PTI.

The 4,000-word unfinished lecture written for IIM students would also be included in the book.

"We will make that lecture public for sure," Mr Singh, who has co-authored two books with the former President, said.

"The only problem is that he had not signed agreement with any publisher on this book. So we have to figure out a way on how to get his unpublished work in print," he said.

Based on topics related to sustainable development, the book is based on managing damages to the earth's ecosystem amidst mankind's quest for development and industrialisation.

"It looks at the idea of sustainability from all angles," Mr Singh said.

It was during the Beijing Forum at China in 2012 that Dr Kalam, author of books like 'Wings of Fire', 'India 2020' and 'Ignited Minds', had first proposed the thought of how important is a livable planet earth.

Besides this, Dr Kalam has hardly left any of his work including poetries unpublished.

"There might be some stray article or memo which is not yet released. Otherwise, whatever he wrote, he made it a point to publish everything," his associate said.