Funeral Would've Been In Bengal If Not For COVID-19: Pranab Mukherjee's Son 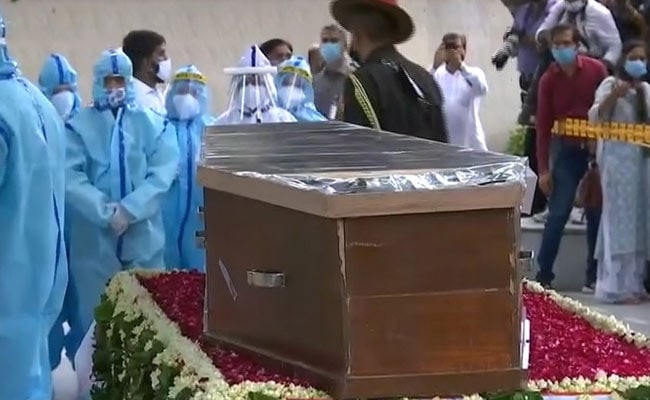 Noting that many people were unable to attend the funeral of former President of India Pranab Mukherjee because of the pandemic, his son Abhijit Mukherjee today said the family would have considered performing the ceremony in West Bengal if restrictions were not in place.

Pranab Mukherjee, who had tested positive for coronavirus and had been in coma after a brain surgery last month, died Monday evening at the Army's Research and Referral Hospital in Delhi at the age of 84.

Abhijeet Mukherjee said: "We would have considered taking his mortal remains for last rites to West Bengal where our relatives and many who are associated with our family live."

Abhijit Mukherjee thanked people for reaching out to his family first with prayers when his father was in the hospital and then expressing their condolence over his death, through phone calls and social media posts.

"Many people wanted to attend his cremation, but it was not possible due to the COVID-19 situation. We thank all the people who stood with us during this hour of grief," he said.

Calling his father a "born soldier" who always fought the odds whether in his student life, as a lawyer or a politician, he said: "When I contested the assembly polls in 2011, he advised me never to hold any grudge or feeling of revenge against anyone."

Mr Mukherjee said his father used to say "lawmakers should not be lawbreakers".

A few Congress workers and some well wishers of the former president were also present at his funeral.

"My father Devendra Prasad Yadav and Pranab da had gone to college together and served as ministers together as well at the Centre," said Devendra Yadav's son Brijendu Yadav who was present at the crematorium along with his sisters Jaishree and Shubhra.

"We have almost five-decades-long relations with the Mukherjee family. I even campaigned for Pranab da when he contested the Lok Sabha election from Jangipur seat in 2009," Mr Brijendu said.

"He was very down to earth. I had close relations with him that lasted for four decades. I served under him when he was the finance minister of the country," Mr Sandhu said.

Pranab Mukherjee was admitted to the Army's Research and Referral Hospital in Delhi on August 10 and was operated upon the same day for removal of a clot in the brain.

He had also tested positive for COVID-19 at the time of his admission. The former president later developed a lung infection.